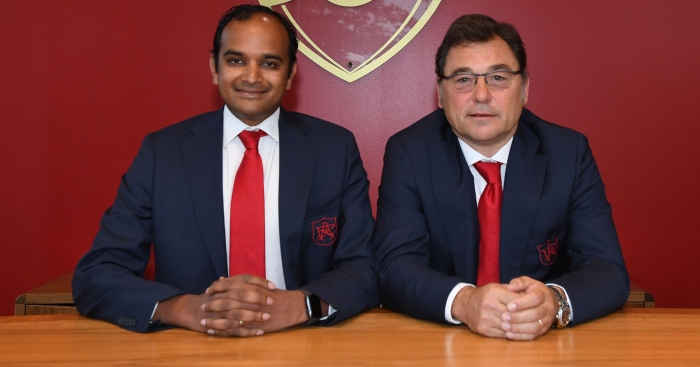 Arsenal want to be part of any discussions on a future European Super League – but deny they would break away from the Premier League if a new competition comes to fruition.

The threat of such a move is back on the agenda after Der Spiegel published a story that claimed several of Europe’s biggest clubs – unhappy at having to share European broadcast revenues with the wider football family – have been secretly plotting to form a rival tournament.

Based on documents and emails obtained from the whistle-blowing platform Football Leaks, the German magazine claimed 11 clubs, including Chelsea, Liverpool, Manchester City, Manchester United and the Gunners could sign up to a US-style, closed league, with five more big names invited to make it a 16-team competition.

The breakaway league would cause major disruption to the current football model, with the Premier League and Champions League suffering as a result.

Vinai Venkatesham, managing director at Arsenal, is keen for the club to be involved in any conversations surrounding a new league – but insists the club have no intention of leaving the domestic game behind.

“Arsenal aren’t or never have been interested in playing in any competition that weakens the Premier League,” he said.

“When people talk about the European Super League, that covers a really big spectrum. People jump to one end of the spectrum and think this is what we are talking about – but actually often it’s just a slight evolution from where we are today.

“I see these articles that Arsenal want to breakaway, we never want to do any of that. But we also have to recognise we have to be in these conversations or we wouldn’t be responsible.

“We have to be in the conversations, it doesn’t necessarily mean we support them.”

Venkatesham was appointed to the role of managing director at the Emirates Stadium after former chief executive Ivan Gazidis left for AC Milan.

As part of the reshuffle, Raul Sanllehi took the new position of Arsenal’s head of football.

The Spaniard was part of a working group which first looked into a European Super League during his time in a similar role at Barcelona.

But he believes any such revamp is still some way off and that renegotiating the terms of the Champions League with UEFA has put off any immediate threat of a breakaway division.

“Basically, as we are responsible for top European clubs, the ECA (European Club Association) had to look to all the options for the future,” he said.

“One of them, of course, could have been the possibility of a European Super League. It was a conversation we didn’t hide from anybody not even from the ECA smaller clubs.

“We looked into that in two ways: a way of exploring the real possibility and also how it would help us to negotiate with UEFA under the new terms because every cycle we will negotiate the Memorandum of Understanding.

“At the end of the day the outcome was the best possible because we got into a new deal with UEFA within the system that protected the domestic leagues.”

Asked if he thought a Super League would happen, Sanllehi replied: “Not in the short term because we have an agreement with UEFA right now – but I don’t know what the future will bring because the future writes itself.

“But what I can assure you is, we think the current situation is an optimal situation we (Arsenal) are very proud to be in the Premier League.

“So that’s why we want to be involved. But right now the situation – I don’t envisage in the short term or medium term radical change.

“I think the momentum for change is constant in that we always have to look for the improvement of the status quo.

“I don’t think there’s going to be a major revolution in the near future – definitely not. But we have to be responsible.

“We have an incredible jewel that is Arsenal Football Club and we need to make sure Arsenal are always in any driving seat of anything that may happen in the future.

“We need to at least be aware and decide in a responsible way whether that is the direction to take or not. But we need to be there.”