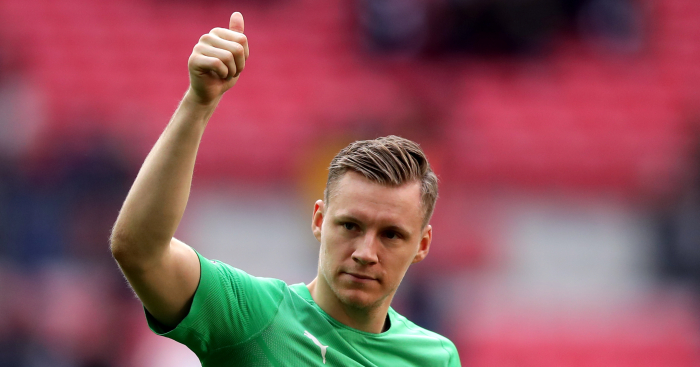 Arsenal goalkeeper Bernd Leno has made his Premier League title prediction, while giving his verdict on where Arsenal will finish.

Leno has adapted well in his first season in England, keeping four Arsenal goalkeeper Bernd Leno has made his Premier League title prediction, while giving his verdict on where Arsenal will finish.clean sheets in 18 Premier League appearances – helping Arsenal to fifth place in the table.

Unai Emery’s side can reclaim a top four spot from Chelsea if they beat Wolves tonight, and Leno is confident that his team will end the season in the Champions League qualification spots.

Meanwhile, he believes his compatriot Jurgen Klopp will suffer disappointment in the title race.

“[It will be] Manchester City first, because Liverpool also have the Champions League, so maybe they will lose some power and energy from that,” Leno told Sky Sports.

“I believe they have a realistic chance against Barcelona, it’s 50-50, but City only have the FA Cup final and the Premier League.”

Arsenal have been in Champions League exile this season, having to compete in the Europa League after coming sixth in the league.  However, Leno is confident that they will return to Europe’s top competition next season.

“I think at the end it will then be us and Tottenham.

“I believe in our quality and we have everything in our own hands. I don’t mind about the other teams though, if we are in the top four everything is OK for me!”

Arsenal could also qualify for the Champions League by winning the Europa League, as they prepare for a semi-final with Valencia. Leno is not sure which way will be the easiest to qualify.

“Both ways are very difficult. We play Valencia, who are a strong team, then in the final we could play Chelsea. That is very difficult and in the Premier League we have three away games.

“I can’t say which way is more difficult…We have to focus on every game and win against Wolves. I think 10 points could be enough, but I don’t know.”