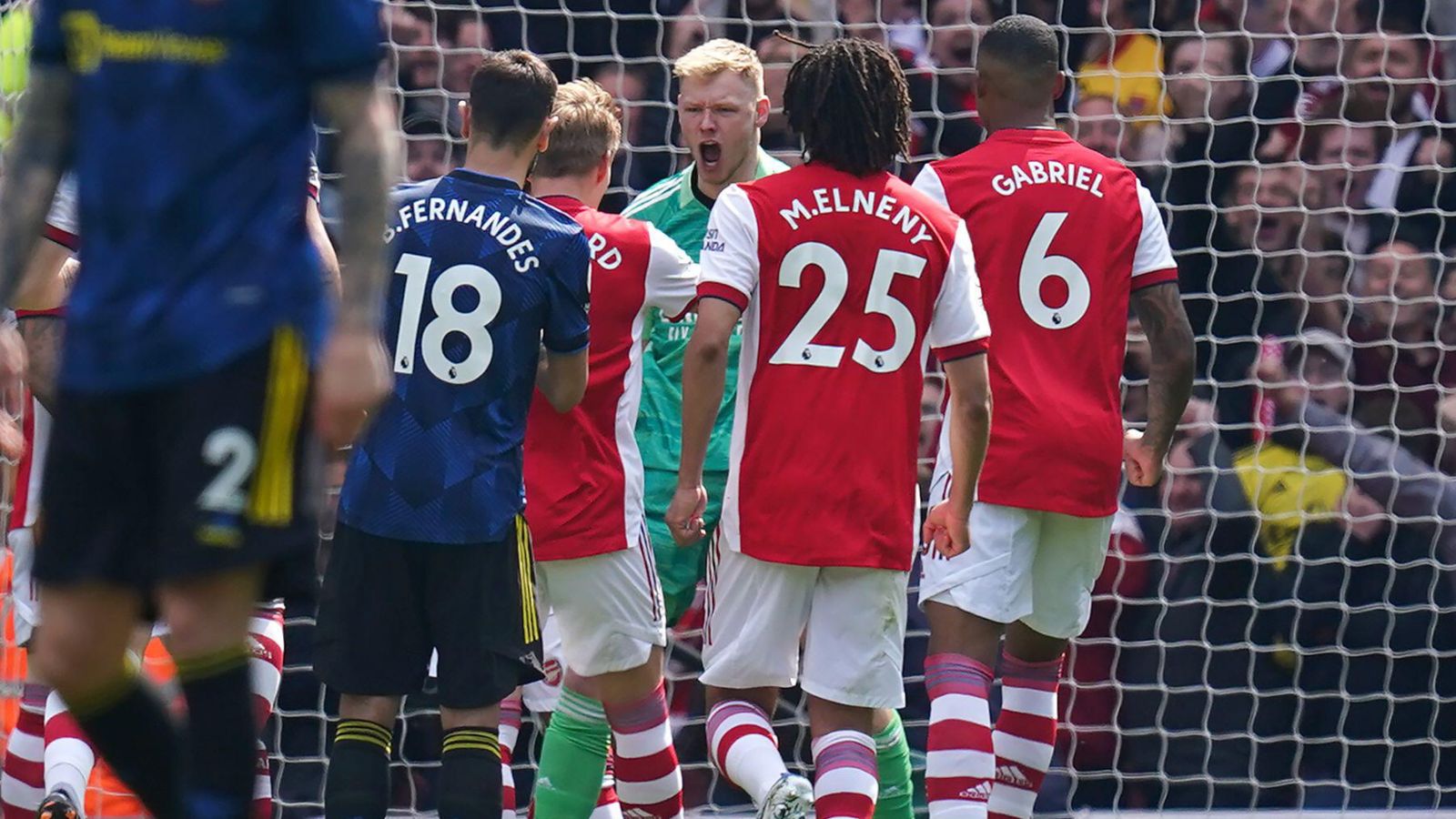 Arsenal goalkeeper Aaron Ramsdale has spoken about his infamous celebration in front of Manchester United midfielder Bruno Fernandes at The Emirates.

The Gunners are in good form of late as they have won three straight games in the Premier League. These victories have come against Chelsea, Man Utd and West Ham.

The score was 2-1 when Fernandes’ penalty struck the post. Ramsdale were among the Arsenal players who celebrated at the expense of the disappointed United man.

Something similar happened back in 2003. Martin Keown mocked Ruud van Nistelrooy when he missed a spot-kick against Arsenal.

Reflecting on his celebration, Ramsdale suggested that the incident has been “blown out of proportion”:

“It was good, but I think it got blown out of proportion because there were five or six Arsenal players in front of me so I celebrated with them,” Ramsdale said (quotes via That Peter Crouch podcast).

“It looked like it, I probably had that [Keown’s celebration] in my head a bit and then stopped halfway, but it’s just emotion. It’s nothing to do with him [Fernandes] or to do with the football club or anything like that.”

When asked about him waving at Chelsea fans at Stamford Bridge during Arsenal’s 4-2 win last month, Ramsdale added:

“It was just pure emotion. I find it quite funny how other players or fans can do what they want to goalies who stand there on their own for 90 minutes getting abused.

“I waved at a Chelsea fan the other week, who was giving me all sorts in the second-half, so when we scored the penalty I waved at him and security guard said, ‘why did you do that? Was it necessary?’

“I said, ‘you’ve listened to everything he said, he has called me every name under the sun, but I can’t simply wave’. It’s enjoyment for me.”

Elsewhere, according to Football London, Arsenal are contemplating making a move for Aaron Hickey in the upcoming summer transfer window.

Arsenal manager Arteta is looking to bulk up his defence by adding a versatile left-sided player in the summer.

Kieran Tierney is out for the rest of the season after undergoing knee surgery, meanwhile, former Bologna man Takehiro Tomiyasu has recently returned from a lengthy spell on the sidelines.

Furthermore, Portuguese left-back Nuno Tavares has failed to impress in his first season at Arsenal with his defensive performances coming under scrutiny.