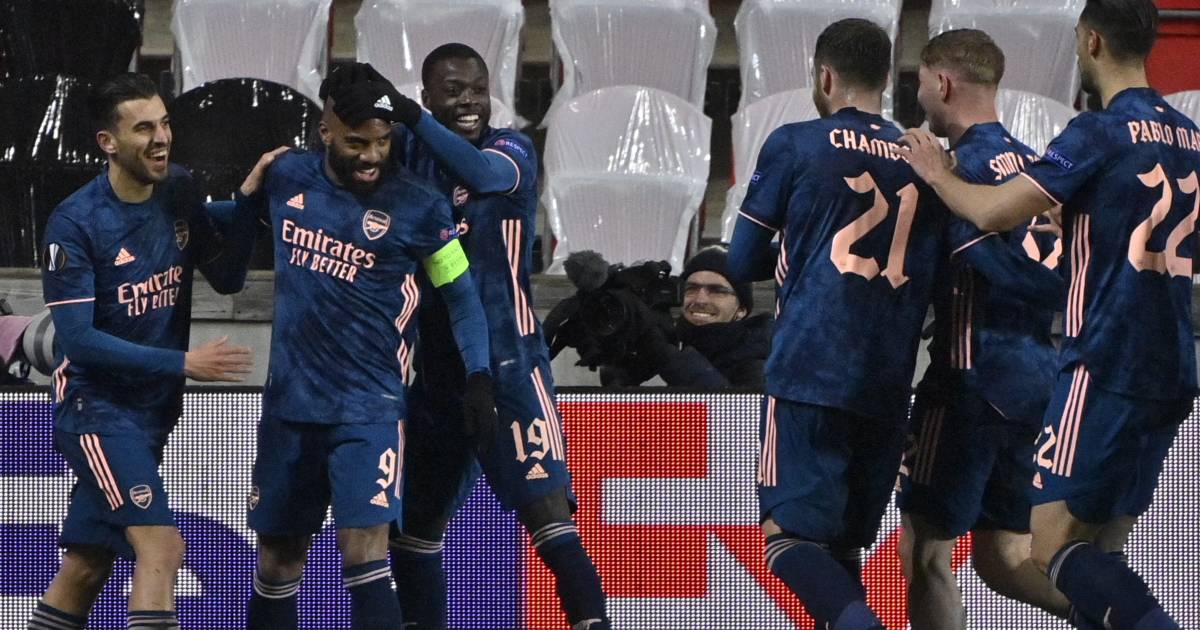 From the moment before kick-off when Alexandre Lacazette took the knee right in front of Slavia Prague’s players, this was pretty much a picture perfect display from Arsenal.

In the wake of UEFA deciding Ondrej Kudela’s racist abuse of Rangers’ Glen Kamara during Slavia’s last-16 clash at Ibrox last month was very nearly as bad and serious as Kieran Trippier telling some friends he was moving to Spain, Lacazette managed to be understated, calm, yet utterly and unmissably crystal clear. It was a powerful moment.

With Pierre-Emerick Aubameyang sidelined, Lacazette appears to be relishing a leadership role both as player and guide for the young Gunners around him. He was captain for the day and, having been notably excellent in the 3-0 win at Sheffield United a few days ago, repeated the performance and his two-goal contribution here. But also so much more.

So wildly straightforward was this 4-0 win for Arsenal that it’s temptingly easy to dismiss it as just a Europa League cruise of the sort one can sometimes encounter even at this stage of the competition. And yes, Slavia were eye-bleedingly bad, especially in the first 30 minutes that settled the tie. But that is far too reductive. Arsenal were breathtaking. Arsenal forced those errors from a Slavia side who very much held their own at the Emirates a week ago and boasted a rock-solid home record.

They had not lost on this ground in 30 games dating back to Champions League games in 2019 when they found themselves in a lovely group alongside Barcelona, Borussia Dortmund and Inter. If domestic Czech opposition isn’t all that flash, then consider their European record here this season. Three goals conceded in six games. Leicester didn’t score here. Bayer Leverkusen didn’t score here. Arsenal scored three inside the first 25 minutes – and that all on the back of having a goal disallowed by a tight but correct VAR offside decision against Emile Smith Rowe.

By the time UEFA showed us the pictures to confirm this, it no longer mattered. Smith Rowe had by then already created another goal, coolly finished by Nicolas Pepe, having seen off literally six defenders via one very slightly lucky ricochet and two extremely naughty nutmegs. Bukayo Saka was tripped to give Arsenal a penalty – had play been allowed to continue Pepe would probably have scored anyway. Lacazette tucked that away.

And no sooner had the replays of the long-forgotten disallowed goal been shown than Saka had arrowed a precise finish past the wrong-footed and beleaguered Ondrej Kolar.

It was a simply stunning 10 minutes of football. Lacazette as the ringleader with Saka, Pepe and Smith Rowe all having the time of their lives around him. Almost better still for Arsenal, they did absolutely nothing in the remaining 60 minutes to give any hint that what had promised to be a tense and nervous evening had any chance of going back to that script. A truly nasty-looking game that carried the hopes and dreams of Arsenal’s entire season had been turned into a joyous victory lap.

The free-flowing attacking play will quite rightly take the headlines, but Arsenal were exemplary from back to front. The second half was a cruise in which even Slavia appeared to be focused solely on avoiding humiliation, most strikingly when an early second-half Slavia corner was worked all the way back to the halfway line.

Just as both sides appeared to have settled for 3-0, Lacazette calmly picked his moment to add his second and Arsenal’s fourth goal of their finest performance of the season.

It was another smartly taken goal for Arsenal’s captain, but by then it hardly mattered. He and his team had long since made their point.