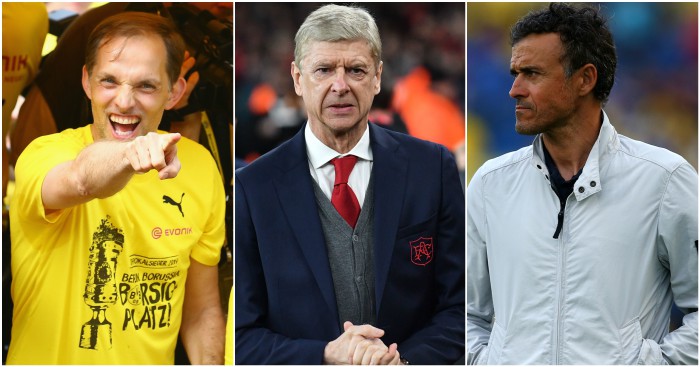 The day after Arsene Wenger announced he will be stepping down from his post at the end of the season, the clamour to identify who will replace him begins…

* The Gunners are in talks with former Barcelona manager Luis Enrique, apparently. The Daily Mail claims ‘only an unexpected glitch in negotiations, which are well advanced, can prevent now the appointment of the 47-year-old’ who has been on sabbatical in Spain since leaving Barcelona last year.

Jeff Powell’s story says Enrique will bring ‘a Spanish revolution’ to the Emirates. Wonderfully, he also reports that appointing Enrique would ‘put Arsenal very much in pole position to sign Lionel Messi if the Argentina superstar ever decides to move to the Premier League’.

* The Mirror carries a similar line to a number of other outlets, suggesting Wenger jumped before he was pushed.

John Cross also has a go at guessing the shortlist of candidates to replace the Frenchman, naming all the managers you would expect to be on there: Enrique, Joachim Loew, Max Allegri, Leonardo Jardim and Brendan Rodgers.

* Carlo Ancelotti isn’t one of the names identified by Cross, but the former Chelsea, Bayern Munich, AC Milan, PSG and Real Madrid boss would be up for it anyway.

The Italian says he would be pleased if Arsenal’s plans involved him, but he hasn’t heard from them yet.

* One name David Ornstein is willing to write off is Thomas Tuchel. The BBC‘s go-to man for all things Gunners says the German has admirers at Arsenal, but having fallen out with head of recruitment Sven Mislintat during their time together at Borussia Dortmund, a reunion is unlikely.

Anyway, Tuchel is likely heading for PSG, according to Ornstein.

* The PSG role is one Wenger has lazily been linked with in recent months but even if the 68-year-old isn’t heading for the French capital, Goal reports that he wants an immediate return to work upon walking away from Arsenal.

Wenger may not manage a club side again but he is said to be open to taking a sporting director’s job, or possibly a head coach’s role with a national team.

That said, The Telegraph suggests he could be offered a way back into club football by Monaco or Everton.

Portrait of an icon: Arsene Wenger

Arsenal players past and present react to Wenger news

Wenger left due to ‘very real threat’ of Arsenal sack

Ferguson reacts to Wenger’s exit: ‘One of the greatest’

Wenger: Vieira has the potential to manage Arsenal