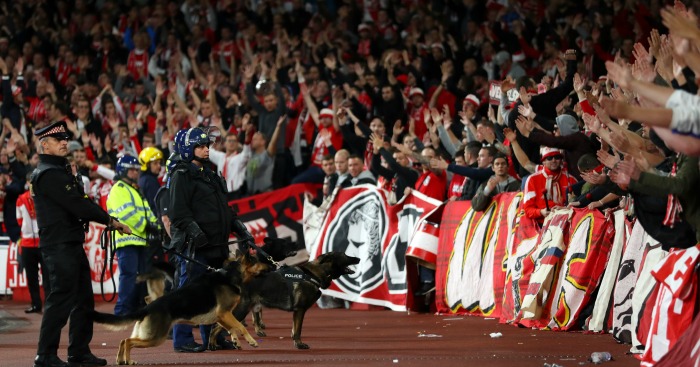 Arsenal will conduct a full review to determine how vast numbers of Cologne supporters gained access to the home sections of the Emirates Stadium for Thursday night’s Europa League clash.

The Group H opener, in which Arsenal eventually ran out as 3-1 winners, was delayed by an hour as ticketless Cologne fans looked to gain entry to the ground.

The visitors were issued with 3,000 tickets but around 20,000 Cologne fans are believed to have made the journey to London.

There were clearly thousands of away supporters sitting among Arsenal fans, causing a security risk.

Five arrests were made over the course of the evening and Arsenal issued a statement on Friday insisting the safety of supporters was the main concern at the time.

“Following last night’s UEFA Europa League match with Cologne we would like to stress that fan safety was always our paramount concern and informed all decisions made,” it read.

“We have launched a full review into the circumstances surrounding the game and will ensure any lessons that can be learned are used in the future.”