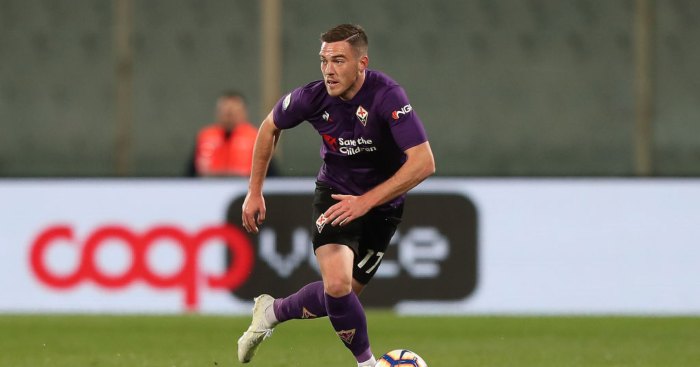 Arsenal have made a late offer to rival Serie A side Napoli for Fiorentina midfielder Jordan Veretout, according to reports.

Following an indifferent spell during his time at Aston Villa, Veretout has carved out a good reputation for himself in Serie A and was one of La Viola’s standout performers this season.

That has led to interest in the player from Carlo Ancelotti’s Napoli and a deal – reported to be worth around €22m (£19.89m)  – has been struck between the two Serie A sides.

The sale will mark quite the profit for Fiorentina, who paid Villa around €7m to sign Veretout in summer 2017.

But with Unai Emery seeking a new box-to-box midfielder to replace Aaron Ramsey, Arsenal are reported to have matched Napoli’s bid for Vetertout in a bid to bring the Frenchman back to the Premier League.

Emery is being forced to work with a reduced budget this summer after the Gunners missed the chance to return to the Champions League after defeat to Chelsea in the Europa League final.

The Spanish coach now must work with a reduced budget of around £35m this summer – and L’Equipe claims Vetertout has emerged as a serious option for the Gunners boss.

The 26-year-old scored five times and laid on three other goals this season, with the report claiming Emery thinks the player would be a useful addition to his midfield.

News of Arsenal’s reported interest in Veretout comes after the club were also linked with Sampdoria midfielder Dennis Praet. He is also valued around the €22m mark, but it seems Arsenal may be set to miss out on the Belgian if their bid for Veretout is confirmed.

Veretout is contracted to Fiorentina until 2021 and, as well as Napoli, Sevilla and Roma are also said to be keen on a potential deal for the midfielder.