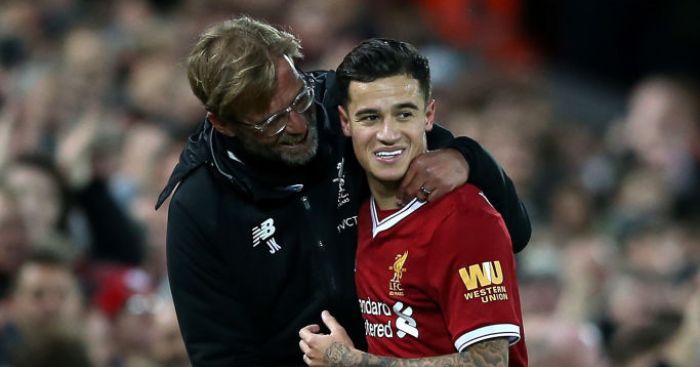 Arsenal legend Emmanuel Petit claims Philippe Coutinho is questioning why he joined Barcelona, just as the Frenchman did when he left the Premier League.

Coutinho joined Barcelona from Liverpool for £142million in January 2018, while Petit made a £7million switch in in 2000.

The Brazilian’s “dream” move hasn’t worked out, with the playmaker loaned out to Bayern Munich.

Liverpool meanwhile have improved since Coutinho left, winning the Champions League last season and dominating the Premier League this term.

And Petit, who watched Arsenal improve after his transfer to Barcelona in 2000, believes Coutinho will be filled with regret, just as he was.

“If I was Philippe Coutinho, every morning I would wake up and think to myself, ‘Why, why, did I sign [for Barcelona] in Spain?'” Petit told Mirror Football.

“And to be honest with you I am sure Coutinho has been asking himself the same question for a while now. He left for Bayern Munich, he does sometimes play well but he’s not really a first-team player.”

Bayern Munich stumped up £7.78m to sign Coutinho on loan in January and have the option of making the deal permanent at the end of the season.

But they have no plans to exercise this clause, and Coutinho has subsequently been linked with a Premier League return, with Chelsea reportedly interested.

“I’m pretty sure it would work out for him [returning to England]. He fits perfectly with the Premier League,” Petit added.

“He’s got the vision, the technique, the speed, he can strike, he has the creativity.

“We all know what he is capable of. I was a big fan of his when he was at Liverpool. I would be very, very happy to see him back in the Premier League.

“He won’t go back to Liverpool. When I was at Barcelona, they wanted me back at Arsenal, and it was tempting – I was close to returning to Arsenal.

“But at the end of the day, I was thinking ‘Emmanuel, you need to be honest with yourself. If you left a year ago it was for a reason.'”

“If Coutinho is honest with himself, since he left Liverpool they have won the Champions League and they’re on the way to winning the Premier League. Liverpool haven’t needed him, so why would he go back to Liverpool?”