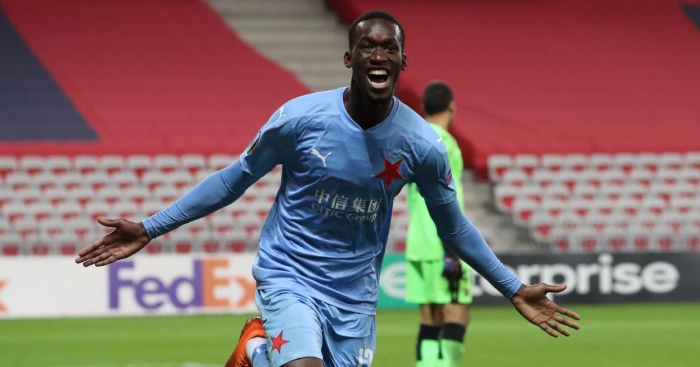 Arsenal have been linked with a move for Slavia Prague forward Abdallah Sima, who has been dubbed ‘the next Thierry Henry’.

The Gunners are currently preparing for a busy January transfer window as club chiefs look to bolster the squad.

They seem to have secured their first transfer, for 18-year-old Omar Rekik from Hertha Berlin.

FEATURE: Leeds fly in our Premier League winners and losers

Another exciting teenager could also move to the Emirates in 2021, if rumours are to be believed.

According to Italian source Calcio Mercato (via the Daily Star), Arsenal have lined up a transfer for Sima.

Sima is proving to be one of the best young talents right now. The 19-year-old forward has already bagged nine goals in 12 appearances for Slavia Prague.

That’s led to plenty of speculation and even talk of which Arsenal legend he emulates. The report affectionately refers to him as ‘the next Thierry Henry’.

The Senegalese youngster mainly plays on the right wing, which is the same position that Henry started in for Arsenal.

He can also play up front or just behind the striker. This is just his first season of professional football, and he’s already proving to be a shrewd buy for the Czech Republic side.

They will now be looking to make a big profit on the player if Europe’s elite come searching.

That could increase if a bidding war starts. Juventus are the other major European powerhouse believed to be interested. They’re joined by Premier League side West Ham, who effectively brought in Tomas Soucek and Vladimir Coufal from Slavia Prague.

Arsenal will need to spend big if they are to improve their attacking options with an exciting teenager in the January window.