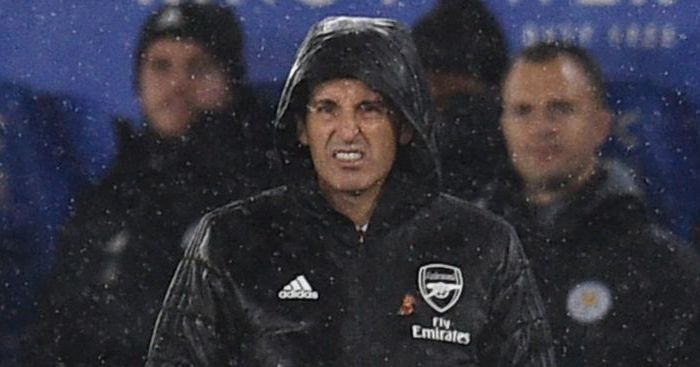 Unai Emery retains ‘the total backing of Arsenal’s ownership’ as club manager after reports emerged of Luis Enrique being lined up to replace him.

Arsenal slumped to a third defeat of the Premier League season against Leicester on Saturday, leaving them eight points behind the top four and winless in five games.

Their only victory in the last month came courtesy of two late free-kicks against Vitoria in the Europa League, with Sheffield United, Crystal Palace, Liverpool’s children, Wolves, Vitoria themselves and now Leicester at least avoiding defeat in that time.

The Leicester game was a particular low point, Emery deploying a five-man defence and conservative style, with Arsenal having a single shot on target, and no efforts of any kind beyond the 53rd minute.

Yet David Ornstein of The Athletic claims ‘the internal view’ to be that Arsenal ‘had been dominating play, creating doubts in their opponents’ minds and building momentum’ before Jamie Vardy’s second-half opener.

With Leicester considered ‘an extremely strong side,’ the Arsenal hierarchy ‘remain “100 per cent” behind Emery’ as the Gunners ‘showed clear signs of improved performance’.

No shot of any kind after the 53rd minute.

Got to say, this is a monumentally misjudged briefing by Arsenal hierarchy.

If they think backing Emery allows them to hide behind the manager, they’re wrong.

Spotlight and ire now directly on them.

They were ‘encouraged’ that the club is ‘on the right path’ with a squad and staff capable of delivering success. ‘They are adamant their project is sound’ and ‘well planned’.

There are many who ‘also apportion blame to the Video Assistant Referee (VAR) system.’ Stan and Josh Kroenke, Raul Sanllehi, Vinai Venkatesham and Edu are among those behind Emery, and it is even said that an improved contract offer was mooted at the end of last season.

The report also refers to legitimate frustrations from disgruntled Arsenal fans as ‘noise’, and that ‘they are determined not to let it influence their thoughts or actions’.

This all comes after Kike Marin of El Confidencial stated that head of football Sanllehi had been in contact with former Barcelona and Spain manager Luis Enrique over replacing his compatriot. Not when Arsenal are playing so damn good in losing by two clear goals to Leicester.