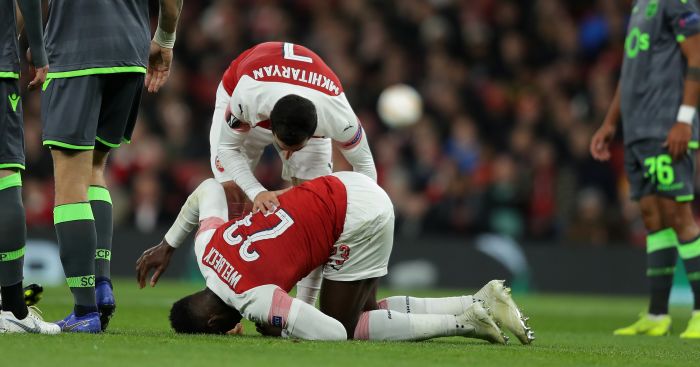 Arsenal could be forced into the January transfer market due to Danny Welbeck’s ankle injury, according to the club’s head of football Raul Sanllehi

The England international broke his ankle during the Gunners’ recent 0-0 draw against Sporting Lisbon in the Europa League.

Welbeck had been used in cup competitions under Unai Emery, while he was also utilised off the bench in the Premier League.

However, with the clock running down on his contract at the end of the season, it could be that Welbeck has played his final match for Arsenal.

Youngster Eddie Nketiah could get the chance to fill Welbeck’s shoes, while Sanllehi didn’t rule out Arsenal using the winter transfer window.

More from Planet Sport: EXCLUSIVE – Greg Rusedski gives his verdict on what comes next for Roger Federer (Tennis365)

“That is absolutely something unplanned,” Sanllehi said of Welbeck’s injury to Sky Sports.

“Yes, that makes you consider things. I am not saying that’s a green light to go to the market but we have good players in the house also that may get further opportunities, like Eddie Nketiah for example.

“We need to see. We are in November, so it’s a good time to start analysing what options we have in the market. We are not closing the door but it’s still not the preferred one.

“The plans were made in the summer. We are happy with how things are going. We are always going to strive to be the best team we can be.

“If there is a very good opportunity, we are definitely going to consider [it], we will see. Danny Welbeck’s injury alters, in a way, the views.”