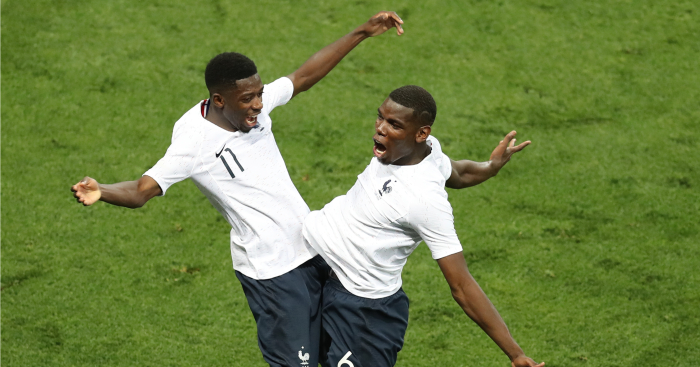 Barcelona will only pursue a move for Manchester United midfielder Paul Pogba if they sell Arsenal target Ousmane Dembele.

Pogba’s future at United is in significant doubt as his relationship with manager Jose Mourinho continues to deteriorate.

Agent Mino Raiola is said to be trying to force his Old Trafford exit, with Barcelona the most likely destination.

According to the Daily Mail however, Barcelona need to raise the money to fund a possible move, and Arsenal could prove important.

The Catalan club ‘baulked’ at the cost of moves for Antoine Griezmann and Willian this summer, opting instead to sign the cheaper Bordeaux forward Malcom.

The Mail say they ‘are not in a financially strong enough position’ therefore to meet United’s likely asking price for Pogba.

As a result, they could generate funds by selling Arsenal target Dembele, who ‘was knocked sideways’ by the arrival of Malcom.

Barcelona have assured Dembele he will not be sold, but manager Ernesto Valverde ‘is not overly enamoured’ with a player who joined for £96m last summer.

Unai Emery is an admirer of Dembele, who is close friends with Pierre-Emerick Aubameyang, Henrikh Mkhitaryan and Alexandre Lacazette.

‘Arsenal could make an offer to loan Dembele with a compulsory buy option if Emery can persuade the club to commit to breaking their transfer record,’ the story states.

If Barcelona do sell Dembele, they would then be free to pursue Pogba.