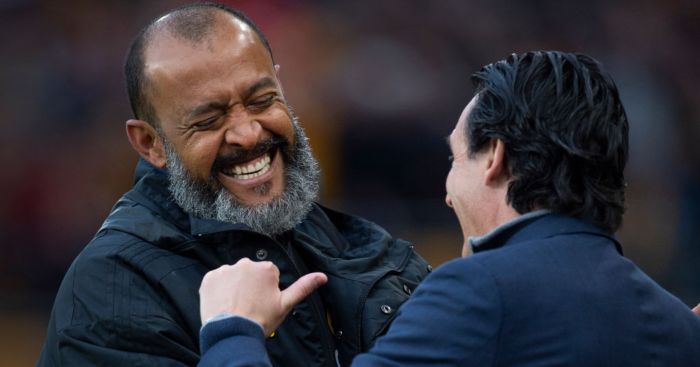 Unai Emery hasn’t actually been sacked yet. Arsenal have waited longer than most – presumably wanting to avoid the post-legendary-manager conveyor belt mistake made by Manchester United – but the Spaniard is on borrowed time. Nuno Espirito Santo has emerged as the frontrunner to replace Emery at the Emirates and short of landing Mauricio Pochettino – which won’t happen, no matter how many ex-Arsenal players wish it so – Nuno is not only the obvious choice, but quite possibly the best option for Arsenal. But is Arsenal the best option for him?

Nuno appears to be the antithesis of the Unai Emery caricature drawn by Arsenal fans. The Portuguese is tactically astute – and certainly tactically implacable – as well as being an imposing figure who crucially develops and improves players. See: Adama Traore, infuriating speed merchant turned potential Spain international.

Many of the attributes that make Nuno so appealing are the same as those that urged Arsenal to plump for Emery 18 months ago. And while some of Emery’s ability to develop players may have been beaten out of him in his time at PSG – where the proclivity for instant success overruled long-term planning – and some of his tactical nous may have been lost in translation, he is not suddenly a bad manager. And Nuno should perhaps take heed of Emery’s failure as a warning that Arsenal is not the attractive prospect it initially appears.

If the atmosphere at the Emirates was poisonous towards the end of Arsene Wenger’s tenure, its virulency has now reached levels where the Arsenal players seemingly dread stepping out to play in front of their home fans. And though the cloud over the club would lift temporarily, and could be broken indefinitely through the appointment of Nuno, why should the man himself take the risk? Why move from Wolves where he is so adored, with a fanbase that has backed him through times of relative strife – as he experienced at the start of this season – to one where he could become the latest in a growing list of club employees to feel the wrath of the home support?

It’s a case of weighing that risk against the potential reward. Arsenal’s superior revenue, the stadium and the ‘big club’ clout – allowing them to compete to sign the best in Europe – means the prospect of winning top honours is greater than at Wolves. But such is the instability and exorbitant expectation at Arsenal, the propensity for failure – deemed to be anything less than Champions League qualification – is also much higher.

And despite a very English-centric aversion to a ‘project’ – a longstanding managerial relationship with a football club – there’s a sense that the 45-year-old has unfinished business at Wolves. Does he want to jump off that speeding train mid-journey?

Having sealed promotion from the Championship in 2018, Nuno drove Wolves to seventh in the Premier League last season, securing European football for the first time since 1981. And now they sit fifth – above Arsenal, Manchester United and Spurs – and are on the cusp of qualification from the Europa League group stage. It’s been an astonishing achievement.

If he were to be tempted away, he would relinquish the chance to work with what is very much his team. Many of the 23 signings made during his time at Molineux have performed way beyond expectations. And while Nuno can claim some of the plaudits for the successes of the likes of Willy Boly (£11million), Ruben Neves (£16million) and Diogo Jota (£12.6million), there are other members of Wolves’ well-constructed and hardworking backroom staff who should take a large proportion of the credit.

Fosun International’s takeover in 2016 saw a well-documented increase in the money pumped into Wolves, but more importantly saw the modernisation of the club, with a dramatic increase in the number of scouts recruited – headed by chief scout John Marshall – and the installation of Kevin Thelwell, the Sporting Director. This sort of club refurb is something Arsenal are now replicating, but they are still very much in the early stages, with Director of Football Raul Sanllehi and Technical Director Edu only recently installed at the club. Tasked with undoing the damage of years of stagnation under Arsene Wenger, this is a job far greater than that of their opposite numbers at Wolves, and one that is likely to claim Unai Emery as a victim.

This is another reason Nuno is the perfect fit for Arsenal, to be the manager to lead them through the same transition he has so expertly navigated once already. But early indications suggest that the men he would be working under at the Emirates aren’t quite as savvy as those at Molineux.

Two of their summer transfers look as though they were made by a Championship Manager novice – Nicolas Pepe, the marquee signing you are forced to pay over the odds for, and David Luiz, the ageing, error-prone defender you hope you can eke another year out of, but ultimately cannot. Along with Kieron Tierney and Gabriel Martinelli – who do look promising – they have joined a squad devoid of defensive stability, with undeniable quality up front. But other than Pierre-Emerick Aubameyang and Alexandre Lacazette – strikers consistently linked with a move elsewhere due to that quality – this is a squad that shows mere glimpses of potential, weighed down by a lot of overpaid deadwood.

Unfortunately Wolves cannot move with Nuno to Arsenal; while he would be confident in his team righting the wrongs made by the current Arsenal staff – to turn a lopsided, broken squad into one worthy of the Arsenal name – it would not be his team. Above and below him at Arsenal there would be chaos.

So maybe – if the offer comes – he should consider rebuffing the sleeping giant in favour of the smaller, but more advanced and progressive club which is wide awake but still dreaming.