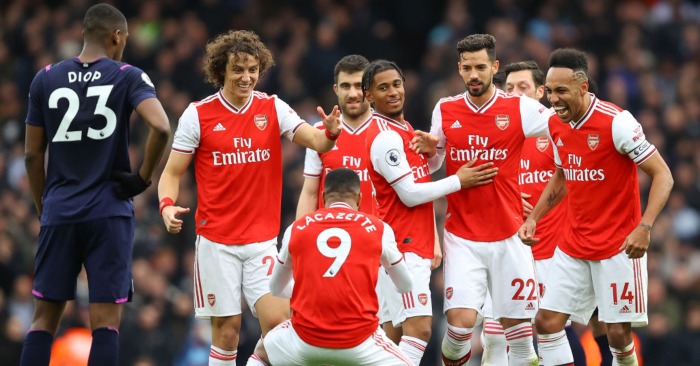 “I genuinely think Mikel Arteta is getting an easy ride from Arsenal fans and the media,” said Stewart Robson, but his miserabilism has been a stalwart of Gunners punditry for so many years that Arsenal could remain unbeaten for eight Premier League games and be the best team in the top flight barring champions-elect Liverpool and he would still be arguing that they have “no game plan at all”. Oh. Wait a minute. That’s exactly the current situation. And he is still bloody miserable. And somehow arguing that there should be more criticism of this Arsenal side and manager.

Perhaps he should have been watching ESPN and their reaction to a 1-0 win over West Ham, with Steve Nicol flippantly describing “a typical Arsenal performance”. Quite how anybody could now describe a 1-0 victory as “a typical Arsenal performance” is a mystery. It’s only their third of the season. Only a fool would have predicted in 2019 that the Gunners would have the tightest defence in the Premier League in 2020; only a fool would now describe the Gunners as anything other than an encouraging work in progress.

“Why do we keep thinking of Arsenal as being Arsenal of 20 years ago? They’ve shown us that they’re a mid-table side; those heady days are over,” continued Nicol, blithely describing a club that has finished in the top six for 25 years as though they were Crystal Palace. He sought to re-frame the discussion and talk about the Gunners as though their history and potential matches their ninth-place standing, but that is to wilfully ignore the evidence of both the statistics and our own eyes that this is an Arsenal side trying to learn and adhere to a new philosophy while simultaneously improving the basics. Being successful while in the process of adaptation is nigh-on impossible. Ask Pep Guardiola, who described his first season at Manchester City as a “disaster”. And that was with the benefit of a full pre-season and a £140m transfer spend.

By any objective measure, Arteta has improved Arsenal. Yes, there have been scratchy draws and scratchier victories, but compare the 2-2 sh*t-fest with Palace at the Emirates earlier this season to the narrow win over West Ham on Saturday. Two opposition teams with similar styles – one ended in a draw and the captain swearing angrily at fans; the other ended in a 1-0 victory, more possession and a higher pass completion rate. There is a natural tendency to belittle Arteta for being Guardiola-lite as 69% possession brought only two shots on target, but being a lesser version of one of the great coaches of modern football is surely better than having no identity at all. There is clear evidence of a plan, even though execution is bizarrely imperfect after less than three months.

It’s unlikely that Arteta would ever choose to field a back four of Sokratis, David Luiz, Pablo Mari and Bukayo Saka and yet Arsenal still kept a clean sheet. And certainly, the controversial inclusion of Sokratis as a right-back has left Nicolas Pepe looking very one-dimensional, but that is a sacrifice Arteta seems willing to make for the sake of a) defensive security and b) Saka’s width on the left, which in turns allows Pierre-Emerick Aubameyang to come inside. It’s not a perfect system but it’s a ‘make do and mend’ solution to an unbalanced squad. It’s also very definitely a plan.

In truth they were poor against the Hammers – victory owed rather more to Bernd Leno than anyone in red – but being anything less than impressed that the Gunners still emerged with three points is ridiculous. As Arteta himself said: “The most important thing is to find a way to win. That is what the big clubs do.”

And Arsenal really are still a big club. They might not be challenging for the title but it’s worth noting amid all the giddiness about this resurgent Manchester United that the Gunners have scored more and conceded fewer goals in 2020. That’s not something that happens by accident. That’s not something that happens if you do not have a plan. And it is absolutely not ‘typical’ of Arsenal over the last decade.