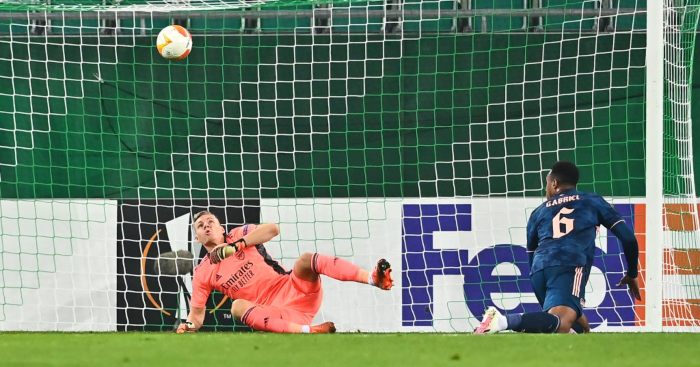 Mikel Arteta has warned Bernd Leno and his Arsenal team-mates must improve decision-making when playing the ball out from the back after their 2-1 victory over Rapid Vienna.

Thomas Partey’s performance was a highlight on what was an average night for the Gunners in Austria, as goals from David Luiz and Pierre-Emerick Aubameyang saw them win 2-1 after Leno’s error had gifted the hosts a second-half lead.

Arsenal were poor for the first hour of the game, culminating with Leno presenting possession to the opposition as he looked to play out from the back and Taxiarchis Fountas putting Rapid ahead.

Leno’s confidence was clearly knocked and he made two further mistakes that, fortunately for Arsenal, did not lead to goals.

Instead they rallied and struck twice in four minutes, Luiz heading in a Nicolas Pepe free-kick before Aubameyang – who came off the bench 13 minutes earlier – combined with fellow substitute Hector Bellerin to turn home a 74th-minute winner from close range.

After the match, Arteta defended Leno but warned him that he must continue to improve his decision-making.

Arteta told journalists: “We need to understand when we can do that and when we should kick the ball to the stand, which is a big part of what we are trying to do.

“But to recognise that from the outside is much easier than from inside. He tried to do that, he has the courage to do it. We have been very successful at doing it as well with the amount of goals that we have scored even in important games.

“So we need to find the right balance, but I will keep encouraging them to do it in the right moments.”

When asked if it is a risk he has accepted, Arteta added: “Yeah absolutely, but they will understand as well better and better the type of balls we have to play in those areas and to who in relation to where the pressure is coming and the type of distances that you can manage from the opponent.

“And after that everything will be better. But obviously it’s a split second that you have to make a decision, you have to get the right touch, the right pass, and the opponents as well are intuitive and they are waiting for that.

“So, again, it’s something that we have to keep working on, because if we want to play the way I want to it’s necessary that the keeper is involved in our build-up play.”