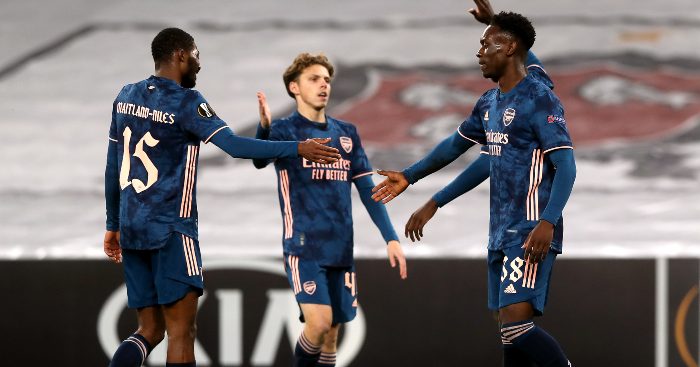 Arsenal boss Mikel Arteta is looking to move on up to eight players in January and the summer as he looks to raise funds for recruitment, according to a report.

The Gunners have won their last three Premier League matches to push them up to 11th in the table after a terrible start to the season.

Prior to that they were winless in seven matches and some fans were even contemplating a potential relegation battle.

Amazingly, they are now only six points off the top-four positions in the league and Arteta could see further progress if he is allowed to bring in some January additions.

However, it looks like he might have to sell first with Miguel Delaney in The Independent claiming Arteta ‘wants up to eight players gone over the January and summer transfer windows in order to speed up his overhaul of the Arsenal squad’.

While Mesut Ozil, Sokratis Papastathopoulos and Sead Kolasinac – who has already been shipped out on loan this month – are named as ‘obvious outcasts’ also up for sale.

Delaney goes on to say that Arsenal will mull over any approaches for Konstantinos Mavropanos and Lucas Torreira, while the Gunners will ‘review the situations of Granit Xhaka and Alexandre Lacazette’.

The report concludes by saying that it’s ‘unlikely Arsenal will sign players this January unless there are also outgoings.’