Home All The News Arteta: There is ‘more to come’ from Partey 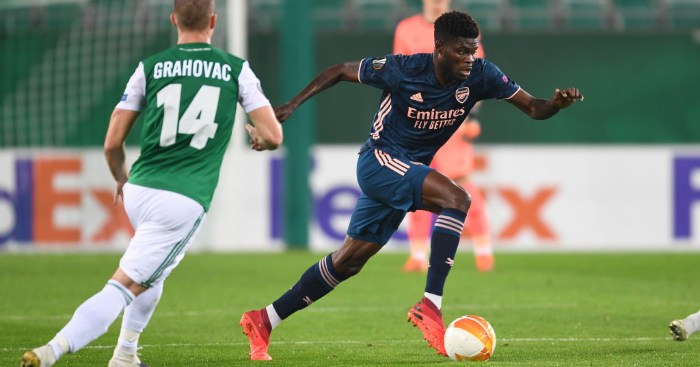 Mikel Arteta was impressed by his new signing in their Europa League opener, but he promised that Partey is only just getting started.

Arsenal survived falling behind to beat Rapid Vienna. The Gunners went one goal down after a mistake from Bernd Leno allowed Taxiarchis Fountas to tap home from close range.

Vienna led for 19 minutes before Arteta’s side got themselves back into the game. David Luiz equalised in the 70th minute with a powerful header.

Arsenal held on for the victory, as they top Group B alongside Molde, who beat Dundalk 2-1 earlier in the night.

But the night ended with Partey taking most of the headlines. He performed well in his full debut, as he offered the Gunners plenty of reassurance in midfield.

As cited by the Daily Mail, Arteta was full of praise for Partey after the victory:

“To be fair he looked really solid, really comfortable.

“I think he held the midfield by himself in the second half as well when we were a little bit more open and we started to take more chances attacking certain spaces with some players.

“But I think he was fantastic tonight and there is much more to come from him obviously.

“Obviously, we know that with the price that we paid for him and the profile that he has, he is going to have a lot of people looking at him in every single game.

“But it’s about the structure we have as a team, the flow, the unity and the cohesion that we need in our team and he is one piece of that. Hopefully, he is a big piece.”