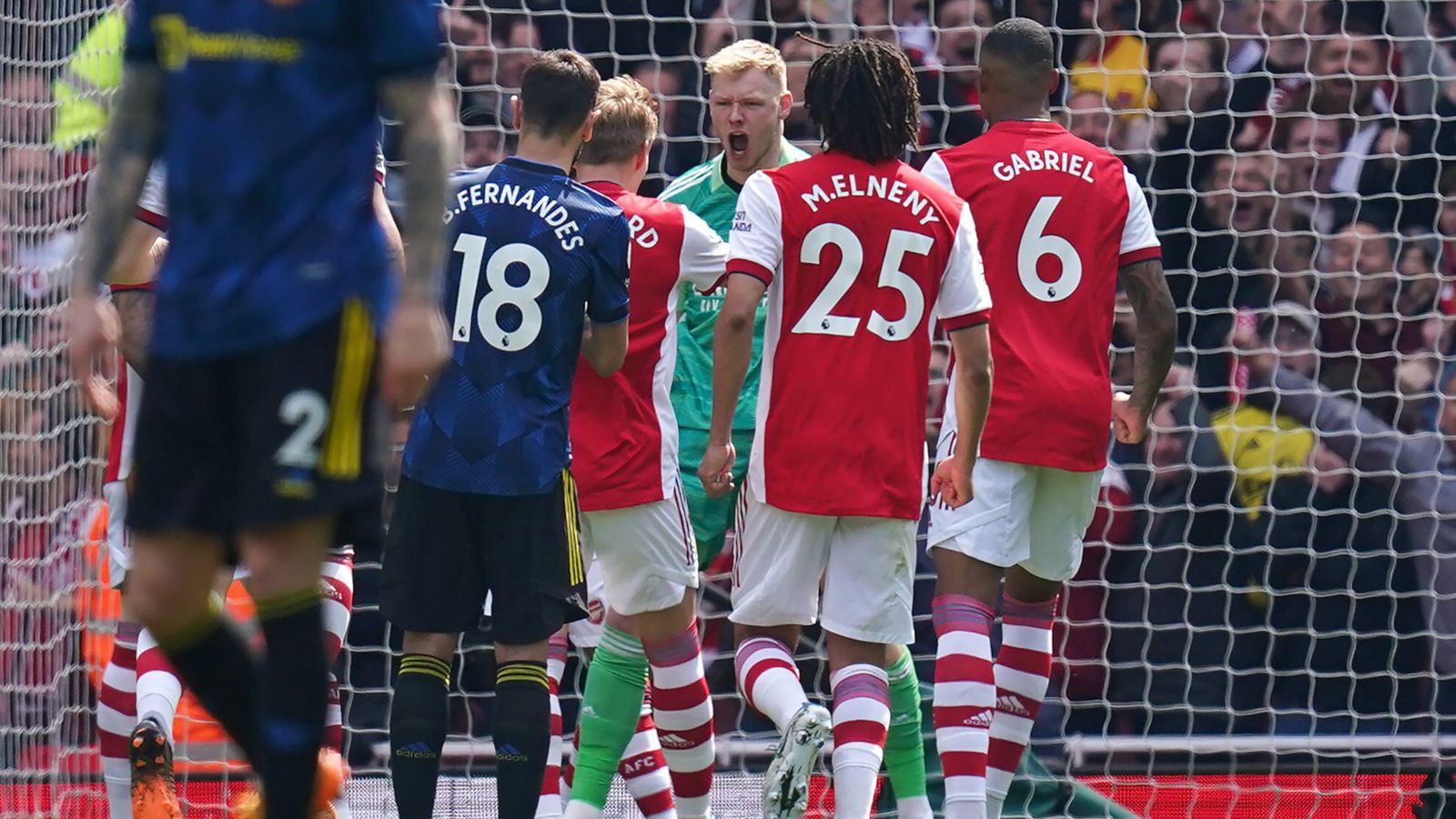 Are Arsenal the ‘most obnoxious team’ in the Premier League this season? Plus, Xhaka, Man Utd, worst signings and lots more…

Pathetic from Ramsdale…
Premier league footballers aren’t known for the self awareness. But surely Aaron Ramsdale, being sent the wrong way on a penalty and celebrating in Fernandes’ face, had to go down as one of the more pathetic things I’ve seen.

Through his excellent efforts this season, a complete non entity of an Arsenal team are running away with the annual Terry-Henry Trophy for most obnoxious team in the top flight
John, Shropshire

Not defending Man Utd but…
I am not trying to gloss over the fact that United do not appear to have any discerning tactics or plan each week and no player in the current squad doesn’t have at least one flaw, but…

Pundits and fans do seem to ignore the rotten luck they have suffered this season. Yea they were outplayed by Liverpool, but after 7 minutes 7 of their strongest 11 weren’t on the pitch.

Against Arsenal, I know it’s off target but hitting the woodwork three times shows that millimeters were in it.

I’ve lost track of the amount of deflected goals they have conceded. Also that Arsenal goal at Old Trafford where Fred kicked De Gea! (Was that this season?)

Like I said, I’m not trying to defend their current effort, but it doesn’t seem to be talked about. I know football’s all tribal and everyone else is “sh*t”, but if something doesn’t fit what the current general view is, it’s just ignored.
M

No Pogba, no Maguire, no Ole… still the same shit! The problem must be something else?
Manyooligan (Ah, just remembered it’s Ronaldo) SoC

Tell you what, I know man utd have been poor lately, and you can’t really say they deserved to win, but they at least deserved something from that game. Say what you will, the third goal should not have stood, I am not as sure about the offside decision but, yes, there is a solid argument for that as well.

That said, it is quite impressive how Utd always manage to match Arsenal in strength even when they play absolute rubbish against everyone else. It is a shame, I was going to say the refereeing lately has been good and we get this match. It can’t be helped, not even a mad man will argue Utd deserve top 4 but it certainly was not out of their reach. As Rangnick said, they should have at least 8 more points than they do.
Sa’ad

There’s a lot of contenders, from Torres to Chelsea and Andy Carroll to Liverpool to George weahs cousin Ali Dia hoodwinking Graeme sounness. But after some thought I’ve discovered the worst ever signing. Nope it’s not Maguire you silly United fans. It’s a city player.

Benjamin Mendy is the worst ever premier League signing. A player who after signing for a world record fee played 50 games and then was never seen on a football pitch again since 2017.
A player who seems to think he has a rape bonus in his contract. This is a sentence that should never be written about a football player but Mendy has 5 more (alleged) rapes than he does goals since he came to Manchester.

One of those girls was 17 when the alleged incident happened. Such a danger is he to the women around him that he was only given bail on the condition that he is under house arrest and must surrender his passport and agree that he nor anyone representing him contact complainants.

World record fee. Never plays. Alleged serial rapist. He’s actually done more to sully city reputation in his time their than cities ethically questionable owners. And he got paid to do it.

Can anyone think of a worse signing?
Lee

Hate
Hatred is an ugly word isn’t it? An ugly word for an ugly emotion. It typically belies great ignorance, seeing another as different, separate from us and ultimately contemptible. It has lead to the worst human atrocities that we witness today and throughout history. It distorts our perspective of other people and causes us to categorise them into groups to which we assign certain characteristics. Derogatory negative characteristics that allow us to attack and destroy those we hate.

We can attack physically, verbally or emotionally.

I’m a Liverpool fan. It would appear a lot of people hate us. We’re told they do anyway. That’s ok, we’re the victims right. This insidious invective is being thrown time and time again in our direction but minorities or fans but sadly increasing minorities.

In the last week small numbers of Utd and City fans chose occasions of anniversaries of the deaths of footballs fans at Hillborough as an opportunity to express their hatred of Liverpool. When we are blinded by hatred we don’t see the other as a human being just like us, no different from us.

There are a number of Liverpool fans who are blinded by hatred just as much as any fans of any other club. Our fans are not all sacred pure and chaste. No group of humans are.

But there is a time to speak up against hatred. When we see innocent families who have suffered the most unimaginable tragedy being taunted at football matches then we have a moral responsibility to call it out and deal with those responsible. Bad things happen when good people do nothing.

I call on Football365 and all decent football fans to unite against this form of footballing hatred which includes Munich air crash chants and homophobic and racist chants as much as Hillsborough chants and to stand united against those who bring this to our terraces.

Anyone singing these chants (how hard would it be to make a list of unacceptable ones and display at games) could easily be identified by cctv and banned for life.

Ignoring hatred in the hope it goes away it a fallacy, hatred grows like a cancer amongst people unless it is identified and cut away.

The silent, decent majority needs to stand together on this one.
Dave LFC

Worst supporters…ever!
With the news that PSG have won their record equalling 10th title you would have imagined there would have been some wild celebrations.

But no! Apparently the fans booed at half time and left 15 minutes before the end, rather than celebrate with the team. All because they didnt win the champions league…having lost to minnows Real Madrid no less.

Is there a more entitled and frankly disgusting set of ‘fans’ in the history of football?
Zak