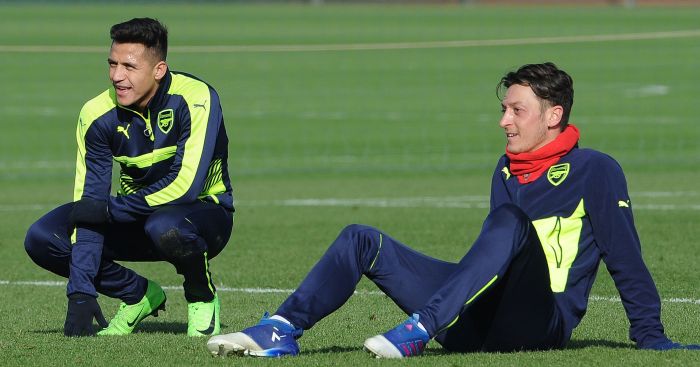 Too many Arsenal players are in their “comfort zone” under Arsene Wenger, according to former Premier League midfielder Didi Hamann.

Pressure is back on Wenger from a section of the club’s support after recent results have scuppered their chances of winning the Premier League title this season.

The Gunners find themselves 10 points behind leaders Chelsea with only 13 matches remaining.

Wenger’s side come up against Bayern Munich in the last-16 of the Champions League on Wednesday evening and Hamann thinks Arsenal need to move away from playing “beautiful football” if they’re to progress.

“Players at Arsenal are very happy with the manager. Mesut Ozil is the prime example,” Hamann wrote in the Daily Express. “He even said he would not sign a new contract until he knew the future of the manager.

“They have got into the comfort zone – ‘we finish fourth, we lose in the last 16, the gaffer’s happy, the club is happy!’ That seems to be what he wants, but you need somebody who stirs things up and says, ‘are we really only a last 16 team?

“Shouldn’t we better?’ Okay, they have had some tough draws but Chelsea found a way with only 10 men at the Nou Camp against Barcelona on the way to winning the Champions League.

“And remember the night we were 3-0 down with Liverpool at half-time to Carlo Ancelotti’s Milan? Chelsea hung in there that night. We turned it around. This is what football is all about. It is not about quality, it is about mentality.

“Only two teams have won the Champions League playing beautiful football. That’s the recent Barcelona side and Real Madrid in the 1960s. Nobody else.

“Somebody has to realise ‘beautiful football’ is not working, but unfortunately it will not happen under this manager.

“People are running out of excuses but the games against Everton and Manchester City were all I needed to know. They lost two games in four days when they had taken the lead.”