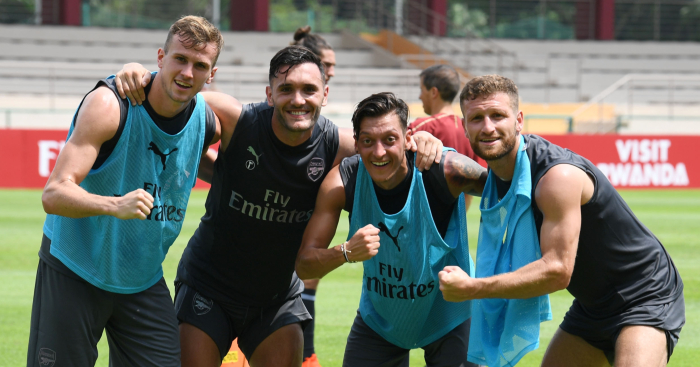 Perez joined Arsenal in summer 2016 but has failed to have much of an impact at all – although a haul of seven goals in 21 games is respectable.

He spent last season on loan at former club Deportivo La Coruna but has two years remaining on his contract at Arsenal.

It was thought that the Gunners would look to offload the Spaniard, and West Ham were linked with a move this transfer window.

According to The Independent, reports in Portugal have suggested that a £4.4m deal was in the works with Sporting Lisbon – a huge loss on the £17.1m fee they initially paid to sign him.

But the same story states that Perez ‘remains fully committed to forcing his way into [Unai] Emery’s plans’.

Emery has made no attacking signings since becoming Arsenal manager this summer, as he inherited a side containing Pierre-Emerick Aubameyang, Alexandre Lacazette, Danny Welbeck, Alex Iwobi and Eddie Nketiah.

The Spaniard’s predilection for trusting young players is likely to force Perez even further down the pecking order as a result, and the manager also hinted at trying to cut his squad numbers further.

“My focus is on the first match and preparing, and not for the window and the possibility to sign another player,” Emery said on Saturday.

“Maybe we need some players to leave because we have lots in the squad, but at the moment, my one focus is on our work.”