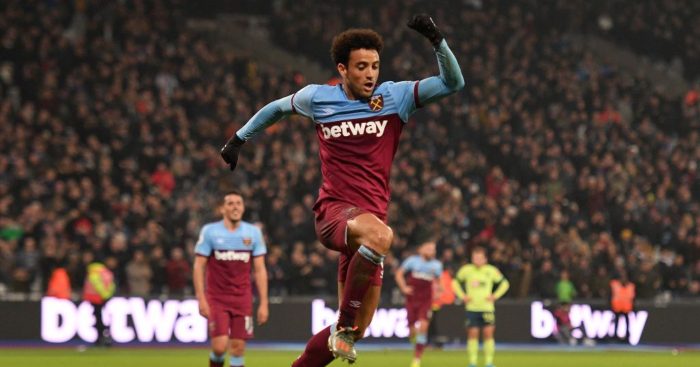 Arsenal are planning a shock move to sign West Ham United’s Felipe Anderson, according to reports.

Anderson joined West Ham two years ago in a then-record deal of around £36 million from Lazio. The Brazilian enjoyed a brilliant first season, as he scored nine goals and assisted another four in the league.

But the 27-year-old had a quieter season in 2019/20. The attacker fell slightly down the pecking order under David Moyes, as he only played a part in 25 league games.

Gunners boss Mikel Arteta is a big fan of Anderson’s, however. Football Insider report that Arteta has made Anderson Arsenal’s ‘top attacking target’ this summer.

The piece adds that West Ham would be willing to let Anderson leave. But they want to recover as much of the £36 million fee spent to bring him in as they can.

Anderson still has two years remaining on his contract, which expires at the end of the 2021/22 season. West Ham do not have to sell their most prized asset, so they are able to demand a high fee.

The Hammers also look likely to sell youngster Grady Diangana to West Brom, so they should create some good funds to improve their squad.

Arsenal have already been busy strengthening their squad during the post-season. Arteta has looked to bolster his defence by signing Lille’s Gabriel Magalhães, Flamengo’s Pablo Mari and Southampton’s Cedric Soares.

The Gunners have also signed former Chelsea forward Willian on a free transfer. They are already well-versed in attacking options with the likes of Nicolas Pepe and Pierre-Emerick Aubameyang still at the club.

Arsenal are also said to be interested in signing Atletico Madrid star Thomas Partey, who is ‘keen’ to join the Gunners.