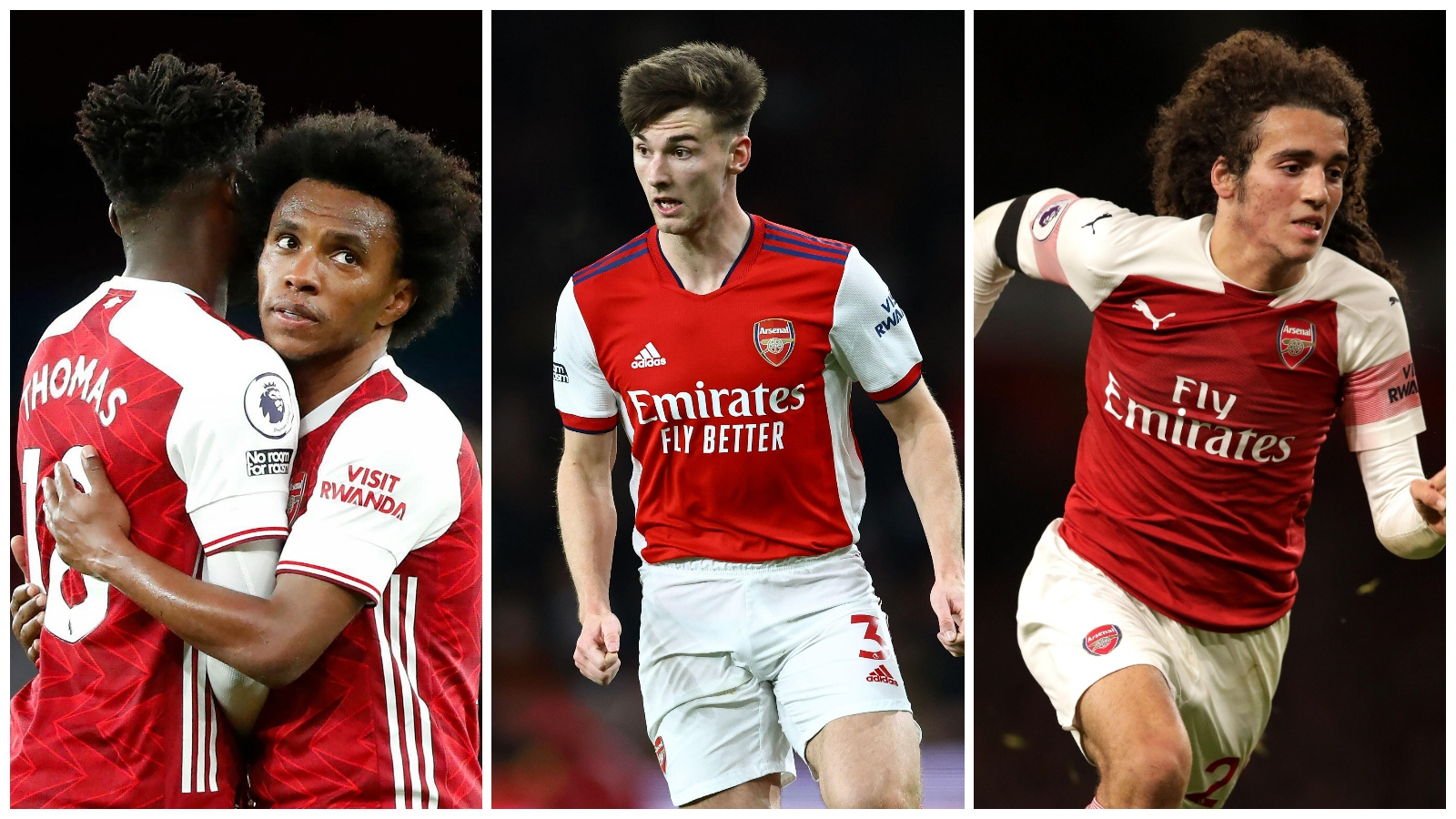 Arsenal have spent a fair whack since Arsene Wenger left in 2018 – meaning criticism of the Kroenke family not putting their hands in their pockets has pretty much been put to bed.

We’ve looked at Everton. We’ve looked at Manchester United. Here is Arsenal. Spoiler alert: they have done better than those two. Fees are from Transfermarkt and the last bracket is where they placed when initially ranked in May.

31) Willian (free) (27)
Signed on astronomical wages after a spell with London rivals Chelsea, Willian scored once in 37 appearances for Arsenal, costing the club a fortune in wages before generously agreeing to terminate his contract last August.

30) Denis Suarez (£2.2m loan fee) (26)
This was one of the most pointless loan signings in Premier League history. Suarez played six times for Arsenal and provided little to no impact.

29) Alex Runarsson (£1.8m) (25)
Runarsson is probably better with his feet than with his hands which, for a goalkeeper, is not ideal.

28) Stephan Lichtsteiner (free) (24)
Emery turned to the experienced Lichtsteiner when looking for someone to provide some cover for Hector Bellerin. He enjoyed a terrific spell with Juventus but was less than impressive in north London. The Swiss right-back spent one season at the Emirates, joining Augsburg before retiring after another single campaign.

27) Nicolas Pepe (£72m) (23)
Arsenal’s club-record signing warmed the bench last season before being shipped out on loan to OGC Nice in the most recent summer transfer window.

Pepe has 27 goals and 21 assists in 112 matches for the Gunners and has often been criticised for his performances. His price tag has held him back at times; £72m is a lot of money which will always bring more scrutiny, unfortunately for the Ivorian.

The talent is there to be seen, but his lack of consistent game time makes it very difficult to stamp his authority on the team and earn a starting berth, especially with Bukayo Saka and Gabriel Martinelli thriving.

26) Pablo Mari (£5.4m + £7.2m loan fee) (22)
Mari was only signed because he is left-footed. Nobody can convince me otherwise. That loan fee is absolutely ridiculous.

25) Sokratis (£14.4m) (21)
The Greek defender was signed early on by Emery as the Spanish manager looked to create a team that could play out from the back like prime Barcelona. It didn’t quite work out that way. Sokratis was a terrific professional during his time at Arsenal but was past his best by the time he made the move to England.

24) Mathew Ryan (loan) (20)
A decent back-up goalkeeper, Ryan spent the second half of 2020/21 at the Emirates. He made three appearances and joined Real Sociedad after his time in north London.

23) Matt Turner (£5.7m) (18)
Arsenal’s new back-up goalkeeper who has been first-choice in the Europa League, but missed the final two matches of the group stage through injury.

22) Lucas Torreira (£25.8m) (16)
Torreira hit the ground running after joining the Gunners in 2018. Off the back of a great World Cup campaign with Uruguay, the midfielder instantly became a fan favourite at the Emirates, making 50 appearances in his debut season as Arsenal reached the Europa League final.

But Arteta did not fancy Torriera and Torreira decided he didn’t want to play in England anymore. He was loaned out to Atletico Madrid in 20/21 and Fiorentina in 21/22 before signing for Galatasaray for a measly £5.2m in August.

4 Man of the Match performances in last 5 Premier League games.

21) Dani Ceballos (loan) (17)
There were high hopes after Arsenal signed a player who ran the show as Spain came out victorious at the 2019 Under-21 European Championships. But Ceballos failed to live up to the hype with Gunners fans happy to see the back of him after his two-year loan.

20) Nuno Tavares (£7m) (14)
Hauled off after 30 minutes against then-Championship side Nottingham Forest in the FA Cup. Taken off at half-time against Crystal Palace before being dropped as central midfielder Granit Xhaka filled in at left-back. It was a rough first season for Tavares. He’s a young lad, though, and has shown that he can be an asset to Arteta’s team. £7m is also peanuts. Fingers crossed his Marseille loan is half as successful as William Saliba’s.

19) Auston Trusty (£1.6m) (19)
Trusty was signed for next to nothing and is doing pretty well on loan at Birmingham.

18) Sambi Lokonga (£15.75m) (10)
A full Belgium international, 22-year-old Lokonga has a superb amount to offer and has the potential to be a mainstay in Arsenal’s starting XI for years to come.

Be that as it may, the young midfielder has struggled to adapt to life in the Premier League, with Matteo Guendouzi taking to English football much quicker than Lokonga as things stand.

17) Bernd Leno (£22.5m) (13)
Leno became the club’s No. 1 goalkeeper with Petr Cech retiring at the end of 18/19. Signed with a solid reputation of being good on the ball, the German shot-stopper has been suspect at times when asked to play out. He has probably never been a top-five keeper in the Premier League and made a nice move to Fulham for only £3.1m. Absolute bargain.

16) Matteo Guendouzi (£7.2m) (11)
This signing had the potential to rank high in a list of Arsene Wenger signings, let alone post-Wenger signings. But Arteta didn’t want anything to do with Guendouzi, who is now starring in Marseille’s midfield and is a full France international. £7.2m was a bargain and Marseille also got a bargain when they spent £9.9m to make his loan permanent at the end of 21/22.

Guendouzi would likely be in the top ten on this list if he was still at the club, but letting him leave for f*** all when he would be a great squad player for Arsenal if he hadn’t grabbed Neal Maupay by the throat is a tough pill to swallow.

15) Fabio Vieira (£30.4m) (NE)
The Portuguese playmaker signed for the Gunners out of the blue and has struggled for game time with Martin Odegaard simply undroppable. There is obviously potential there, and besides a wonderful goal at Brentford, we are yet to really witness it.

14) Cedric Soares (free) (15)
Signed on loan and then offered a contract before kicking a ball, Cedric has failed to endear himself to the club’s fans with numerous mediocre performances. His ranking here is respectable, however, after performing well in Takehiro Tomiyasu’s frequent absence last season.

13) Marquinhos (£2.6m) (NE)
The teenage Brazilian was signed for next to nothing after being in talks with Wolves. He did well on his debut but has struggled for game time since. A January loan should help.

12) David Luiz (£7.8m) (12)
Luiz divided opinion during his Arsenal career. From red cards against Manchester City and Wolves to masterclasses in the 2020 FA Cup semi-final and final to help his side win the trophy, nobody went from a world beater to completely shocking overnight quite like the Brazilian.

11) Takehiro Tomiyasu (£16.7m) (6)
“Tomiyasu was offered to most clubs in the Premier League. He’s a good player but the problem is he’s not really a right-back, nor is he a central defender. I’m not sure how he will get on at Arsenal.”

Egg on your face, Kaveh Solhekol. Tomiyasu is solid, versatile and very two-footed. His injury proneness is a slight worry, but he has been one hell of a signing.

Tomiyasu being 11th is harsh on him, but it shows how good Arsenal’s business has been over the last 18 months.

10) Oleksandr Zinchenko (£30.4m) (NE)
Zinchenko has brought a winning mentality from Manchester City to Arsenal and has adapted very nicely into Arteta’s system. The Ukrainian is the perfect left-back for the Spanish manager, as he effortlessly slots in as another central midfielder, allowing Granit Xhaka to thrive further up the pitch and creating a nice balance with the rest of the defence.

9) Aaron Ramsdale (£25m) (5)
Ramsdale has added a new dimension to the Arsenal team thanks to his ability to play out from the back. Arsenal buying him shocked the club’s fanbase and he was written off before signing on the dotted line. It’s fair to say he has shut up his critics while picking up some new haters from rival fans for his eccentricity, passion and ‘camera saves’. It really is a miserable world out there.

Having said that, what a signing he has been. The fans quite rightly love him and a lot were keen for the former Celtic man to replace Pierre-Emerick Aubameyang as club captain.

7) Gabriel Magalhaes (£23.4m) (3)
Signed for more than his left foot, Gabriel is an excellent player and formed a terrific partnership with Benjamin White last season before doing so once again this campaign, this time with William Saliba. £23m is a bloody bargain in this day and age.

6) Thomas Partey (£45m) (8)
A genuine world-class midfielder, Partey has been fantastic for Arsenal this season.

But injuries have really hindered his time in London and it is clear to see just how much the Gunners miss him when he is unavailable.

5) Benjamin White (£52m) (7)
The transfer fee raised many eyebrows last year, with many laughing at Arsenal for paying more for White than Manchester United did for Raphael Varane. Who’s laughing now, huh?!

With Reece James not going to the World Cup, Kyle Walker still unfit and Trent Alexander-Arnold suspect defensively, White could be England’s first-choice right-back in Qatar.

4) Martin Odegaard (£31.5m + £1.8m loan fee) (4)
Named club captain following the exit of Aubameyang, Odegaard has become the heartbeat of the Arsenal team at such a young age.

Although £31.5m is a lot of money, what a shrewd piece of business it has been.

3) Gabriel Jesus (£45.5m) (NE)
One of two players to come into the Arsenal team this season and transform them into title contenders, Jesus, like Zinchenko, has brought City’s winning mentality to the Emirates and made them genuine title contenders.

He may miss a big chance every game, but Jesus’ overall play cannot be understated. What a terrific footballer.

2) William Saliba (£27m) (9)
The other player to come in at the start of the season and transform the Gunners, Saliba returned to the club after another loan spell. Last term, he was with Marseille, where he was named Ligue 1 Young Player of the Year.

Arguably a top-five central defender in the Premier League at the age of 21, Arsenal really need to tie him down to a new long-term contract.

1) Gabriel Martinelli (£6.4m) (1)
The best Arsenal signing post-Wenger for many reasons. £6.4m for someone of Martinelli’s ability and potential was a masterstroke from the club’s scouts.

Before moving to north London, the Brazilian had a trial with Manchester United, who opted not to sign him because they don’t tend to make good decisions in that department.

With his injury problems behind him after some terrific management from Arteta – despite calls from fans for him to play Martinelli more often – the winger will continue to progress with his transfer value at least ten times what the Gunners paid to sign him from Ituano.