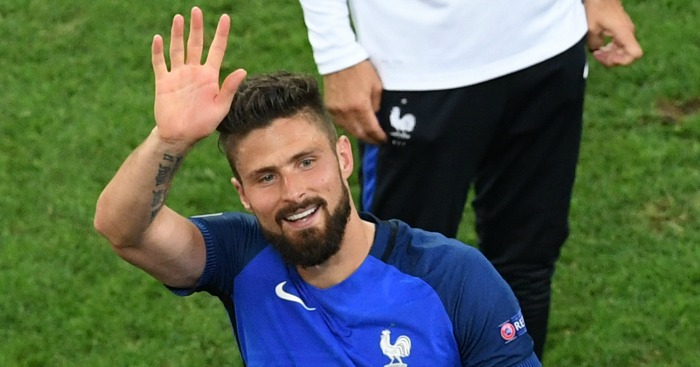 Arsenal have reportedly rejected what is described by the Daily Mirror as ‘a string of enquiries’ for Olivier Giroud.

Giroud has scored 57 Premier League goals in four years for the Gunners, putting him behind only Sergio Aguero and Romelu Lukaku in that timeframe.

Ahead of his appearance in the Euro 2016 final with France, the Mirror claim that the Gunners have changed their minds about selling the much-maligned striker.

Darren Lewis writes: ‘After initially suggesting they could be open to offers at the time, Arsenal have now insisted the Euro 2016 finalist is not for sale.’

It is thought than any pursuit of £42million Lyon striker Alexandre Lacazette or Real Madrid’s overpriced Alvaro Morata will not have an impact on Giroud’s role at the club.

Thierry Henry said this week: “I’ve said it many times – Giroud is very good at what he does. He’s a very good player but he needs to play with someone.

“Giroud, with his back to goal, is very good; you saw the goal against Ireland when Giroud flicked on and [Antoine] Griezmann scored. He can’t turn and outpace anyone, Giroud, but in Griezmann he has a guy he can feed. It’s a great partnership. They share the workload of scoring goals.

“I never doubted what he can do but I think he’s better with someone alongside him.

“Everyone has always said that Arsenal need another striker but that doesn’t mean Giroud has to drop to the bench. He should play with someone because he has all the attributes. I’ve said before, I would have loved to have played with him.”