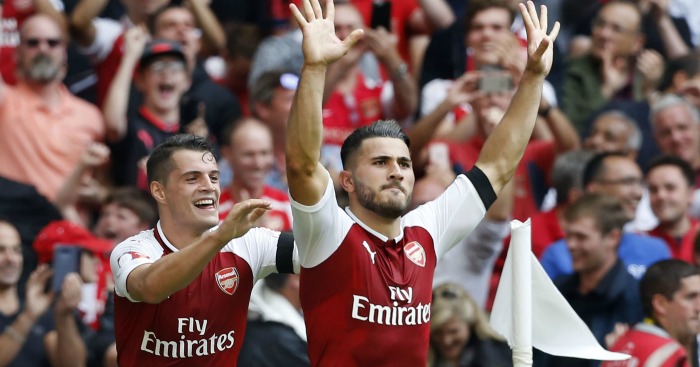 Thrifty Arsenal may have broken their transfer record this summer but through no fault of the Frenchman, early impressions suggest it will not be Alexandre Lacazette who becomes their most popular new arrival in the coming weeks.

After recent months, when most of the talk has been of their best players leaving for Champions League football, the Gunners fans have been holding out for a hero perhaps more than any other top-half club. Rob Holding, naturally, filled the void towards the back end of last season, when the fanbase was tearing itself apart over Wenger In or Wenger Out. But the manager is staying and he appears to have delivered a new cult hero in the formidable shape of an “absolute tank”.

That was Theo Walcott’s description of Sead Kolasinac. The Bosnian arrived on a free transfer from Schalke and early signs suggest Arsenal may have completed one of the transfer window’s shrewder bits of business.

That’s not typical of the Gunners and nor is Kolasinac, which is probably why the Arsenal fans are so enamoured. Upon first glance, the 24-year-old is vastly different to a typical Wenger signing.

“Honestly, he is an absolute animal. He’s incredible… trust me, yeah, he’s not easy to get around – he’s quite wide as well,” insisted Walcott, who has seen more new team-mates come and go than anyone else in the Arsenal squad.

Most of those new recruits over recent years – let’s say the period since Arsenal last won the title, which is unlikely to be a coincidence – have been in the Wenger mould: slight of build, fast of feet, quicker to run from a fight than towards it.

Kolasinac is different. The Bosnian, which immediately makes him seem hard before you even set eyes upon him, is six-foot tall and seemingly as wide and brings with him a steel not too often associated with the modern-day Gunners.

That hadn’t escaped Wenger: “He is physically very strong, naturally,” said the boss. “You have players are pumped up in the gym, and players who are born strong, and he is the second.

“In the Premier League power plays a part, but it is not only that. I got him as well because of his attitude. You need always the combination of talent and attitude.”

God knows Arsenal have lacked a warrior that isn’t Alexis Sanchez. Wenger, like many modern coaches, likes his defenders to be comfortable on the ball and attack, but there can be little argument against the notion that the Arsenal defence had lost its balance.

That’s not to suggest Kolasinac is a clogger; all signs indicate the Gunners have landed a versatile all-rounder who will take little time to adapt to the Premier League.

Which makes it all the more baffling that Wenger was allowed almost a free run at the free agent. Liverpool, Everton, Chelsea, West Brom and Juventus were all credited with varying levels of interest, but once Arsenal’s interest become public, the Emirates always appeared his most likely destination.

Not only does he bring steel – “my strengths are my mentality” he said upon signing – but Kolasinac also offers the manager versatility. The former Germany youth international says left-back is “where I feel most comfortable” but he showed his quality as a centre-half when he replaced Per Mertesacker at Wembley.

“I had hesitation to start him because of the pressure,” said Wenger, alluding yet again to Arsenal’s soft underbelly. But Kolasinac is a different animal – “an absolute animal” who looks set to become the cult hero Gunners fans have been craving.