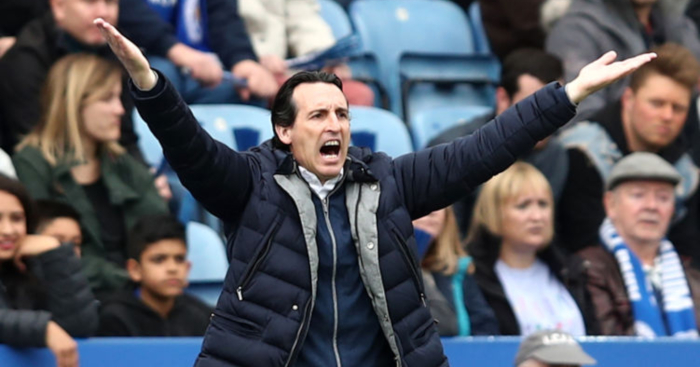 Arsenal are in danger of missing out on Champions League qualification through the Premier League this season after losing three consecutive games, conceding three goals in each defeat.

They face Valencia in the Europa League semi-finals as an alternative route to return to Europe’s top table next season, but their deteriorating league form has placed more pressure on that tie.

The Gunners have followed up three consecutive victories over Napoli and Watford – all with a clean sheet – by losing to Crystal Palace, Wolves and Leicester over a seven-day period.

And the Daily Telegraph say that Emery ‘is facing a fight to prevent his first season in charge falling apart’. That said, the Mailbox reckons he is working miracles with this shower of sh*t.

Some players have apparently ‘been left confused’ by the Spaniard’s team selection, most notably starting with a midfield of Mohamed Elneny and Matteo Guendouzi and Carl Jenkinson at right wing-back against Palace.

His decision to play ‘on the back foot’ against both Wolves and Leicester has also backfired, with Matt Law suggesting ‘there is frustration that he worries too much about the opposition when his team play away from the Emirates’.

The uncertainty over what competition the club will be in next season has also started to affect summer transfer plans, as the club have postponed the appointment of a director of football until the end of the season.