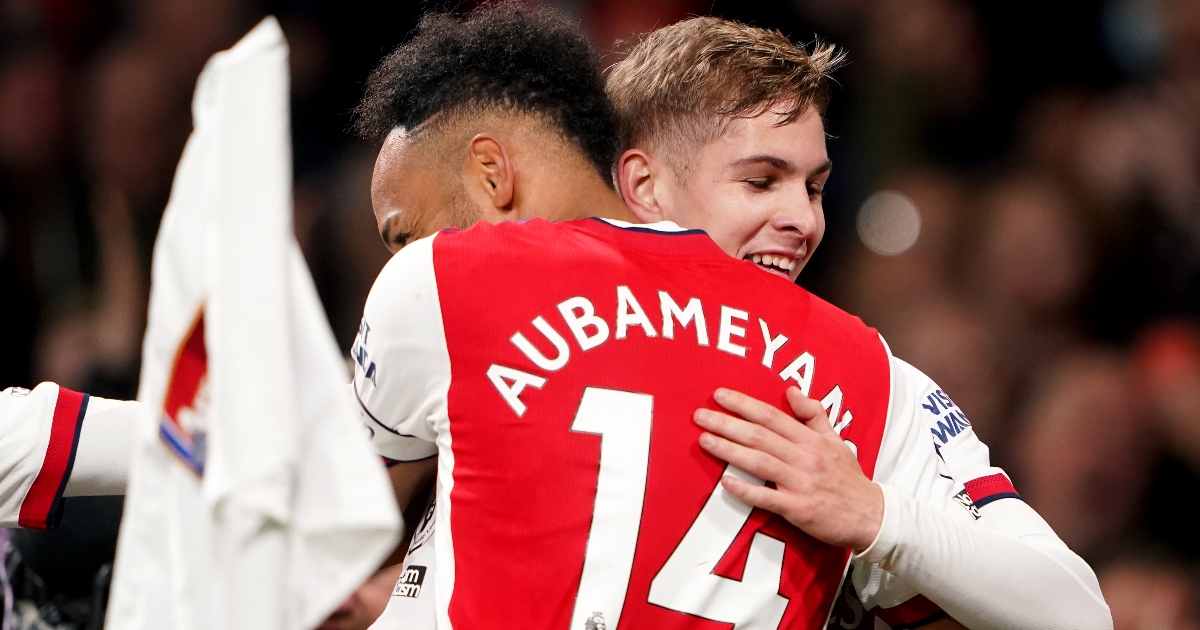 Arsenal go into the November international break high on confidence and only two points adrift of the top four with young guns Emile Smith Rowe and Aaron Ramsdale stealing all the headlines. However, it is two old heads leading by example, and going under the radar in roles that are unfamiliar to them.

Pierre-Emerick Aubameyang and Alexandre Lacazette. These two French-born forwards have formed a wonderful friendship in north London, a friendship that has blossomed into a cohesive partnership on the pitch. They arrived via different routes, with Aubameyang moving to AC Milan at a young age and being loaned out to Dijon, Lille, AS Monaco and Saint-Etienne, before joining the latter permanently in 2012. Lacazette came through the youth system at St-Etienne’s arch-rivals, Lyon, and signed for the Gunners in 2017. Their ties to these mutually loathing French sides has likely brought them closer, potentially adding a bit of edge to their relationship.

Last season, Arsenal were bad and Aubameyang appeared to be finished at the top level. But his poor form was justifiable after fighting off malaria and dealing with his very sick mother. That will derail anyone’s season – these footballers aren’t robots, after all. It was his worst goalscoring season for the Gunners, and he is not quite back to his best in that regard; the truth is he might never get back to his best and that’s fine. The Gabon captain is now 32 years old, and while he is not as clinical as he once was, Mikel Arteta has found a new way for him to be effective.

While the decision to make Aubameyang club captain raised a few eyebrows, he is certainly leading from the front this season. Arteta’s quotes last month on his captain tell a perfect story about how he is relentlessly pressing the opposition, with the Spaniard admitting he ‘prefers this Auba’ to the one that would contribute less defensively, but would score more goals.

Aubameyang’s contribution is certainly not going under the radar within the club, but his poor performance on Sunday against Watford, coupled with his average (for him) scoring form, is overshadowing his influence in Arsenal’s unexpected rise to the top end of the Premier League table. The incredible, England-worthy, form of Emile Smith Rowe, the surprisingly (to some) mammoth additions of Aaron Ramsdale and Ben White, plus the performances from fellow young guns Bukayo Saka, Takehiro Tomiyasu, Gabriel Magalhaes and Nuno Tavares, continue to steal the headlines ahead of the old guard.

In 2021/21, Auba is averaging 1.6 tackles, 16.9 pressures, 1.48 blocks per game whilst winning 48% of his aerial duels. Not only are these statistics significantly higher than last season, but they are among the highest in the league for players in his position. His 0.57 tackles per game in the defensive third is the highest of any forward in the top flight, with the average being 0.19 (all stats via fbref.com).

As for Lacazette, he was signed for around £50m to be the main man under Arsene Wenger, ideally someone that can get 20-plus goals per season. He has never been that guy for Arsenal, but he has been a consistent and reliable player for the north Londoners. The Frenchman scored 14 league goals in his debut season in England, followed by 13, 10 and then 13 again last term.

His dressing-room influence is clear to see. The 30-year-old has a great relationship with the young players, which is also glaringly obvious on the pitch. His link-up play with Smith Rowe, Saka, Martin Odegaard and Nicolas Pepe is excellent; his ability in that department dwarves that of his Gabonese teammate.

Like Aubameyang, Lacazette is operating in a different position to his usual No 9 role, almost acting as a No 9/10 hybrid, linking defence with attack, whilst his captain operates as a left-sided striker. It’s a little bit confusing, but that’s how Arteta likes it. The 4-4-2 system that the Spaniard is utilising could be the perfect game plan; it has certainly helped propel them up the table.

While Smith Rowe scores for fun, Thomas Partey anchors the midfield and the whole defence continues to disavow the ‘Arsenal being soft’ narrative, Auba and Laca are doing their own thing up front: unsettling defences, scoring a respectable amount of goals (we all know the former can do more), and going under the radar within this notably young Gunners squad.