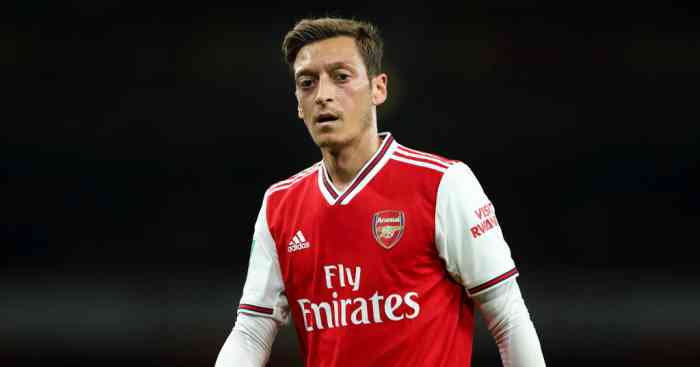 Mesut Ozil has recalled the terrifying carjacking his wife and Arsenal team-mate Sead Kolasinac were involved in this summer.

Ozil, his wife Amine and Kolasinac, were attacked by armed robbers in Golders Green in July.

The robbers, who have since been charged, were warded off by Kolasinac before the victims fled.

Ozil has now recalled the incident for the first time, in conversation with The Athletic.

“My wife wanted to get away immediately. She didn’t feel safe,” Ozil said.

“Even if I let our dogs into the garden and went out with them she would say, ‘Come in, come in, stay in the house!’. She was very concerned.

“Something like this has never happened to us before. She told me — and Sead’s wife told him — let’s go back to our families, to be safe and let everything calm down.

“It was a bad couple of weeks but never made me want to leave London permanently. Now, even for my wife, everything is OK.

“I returned to training and my football was fine, but my mind was always at home with my wife. She was alone in our house and you never know what happens. So I was thinking, ‘OK, just train and go back to your wife’.”

Ozil then went into detail about the terrifying attack, which had him fearing for the safety of his wife.

“My wife was sitting next to me. Then these guys came. We were looking at each other for 10-15 seconds,” Ozil added.

“We were thinking maybe they want to take a picture or something — that’s happened before. Then we noticed that they had a weapon and something was going wrong. They obviously saw the big car and because Sead had just handed me something, they must have noticed he was wearing an expensive watch.

“They told him directly, ‘Give us your watch!’. Sead’s reaction was really, really brave because he attacked one of the attackers. The second one was in front of my car on his moped so I couldn’t drive.

“I saw one chance to drive. If they got to my wife, something terrible might have happened to her. It was going so quickly that you can’t think properly. I drove a little bit forwards and backwards to try and get the moped away. I told Sead, “Jump in! Jump in!” and thankfully he did. The second guy tried again to get in. Sead closed the door and I made a U-turn. There was a construction site there and they took bricks and stones to throw at us.

“I started driving but they followed. I was driving very fast but they kept coming close on the moped. I tried to move the car, block them, escape, but each time they would be there. My wife was extremely scared.

“Nothing happened to us, that’s the most important thing. We were worried these guys had been targeting us, but the police said they found them and a few hours earlier, they tried to robbed other people nearby in a similar way.”