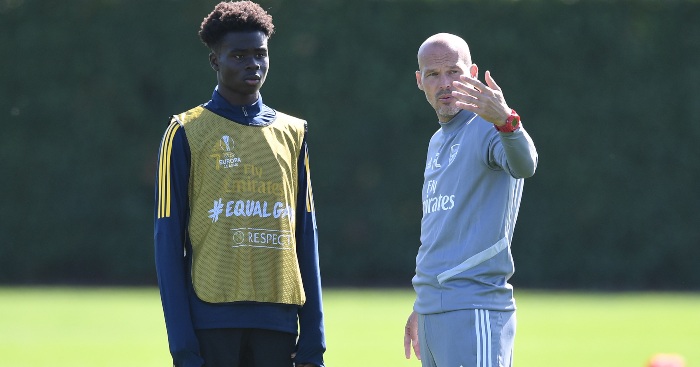 Bukayo Saka has hailed the influence of Freddie Ljungberg after the teenager hit his first senior Arsenal goal in Thursday’s Europa League win at Eintracht Frankfurt.

The winger shone in a much-changed Gunners side, setting up fellow academy graduate Joe Willock and Pierre-Emerick Aubameyang either side of netting a wonderful, long-range strike as Arsenal eased to a 3-0 victory.

Head coach Unai Emery made seven alterations to his side for what, on paper, appeared to be their hardest game in Group F, with Frankfurt not having lost a home European fixture since 2006.

But those that came into the team impressed, particularly youngsters Saka, Willock and Emile Smith Rowe.

Saka, 18, made his debut in last year’s Europa League before making his one and only Premier League appearance to date in a 4-1 win over Fulham on New Year’s Day.

The England Under-19 talent is the latest player off the Hale End production line and he credited Ljungberg, the former Arsenal midfielder who was promoted to Emery’s assistant over the summer having worked with the likes of Saka as Under-23 manager last year, for his development.

“It helps so much,” he replied when asked how useful it is to have Ljungberg’s input.

“Sometimes when I don’t understand, when the coach is trying to communicate with me, I have a better communication with Freddie sometimes, he speaks better English.

“Freddie’s information, he’s been a player at this level before, and it’s vital for me because I play in the same position as me and he’s been a big part in my progress.

“He gives a lot of advice to me every day but one of the most, the best piece of advice he’s given me is to stay humble.

“He’s been with me since I was 15, seen me do amazing things but he always tells me to stay humble, keep working hard because he really thinks I can be a top player.”

Saka would certainly be pleased to leave the same sort of mark on Arsenal as Ljungberg did, and he was delighted to get the ball rolling in Germany.

“It was such a great night for me,” he added. “I’ve always dreamed of this moment from when I was a kid to score a goal for Arsenal Football Club. Now, I’ve done it, I just want to keep working, stay humble, get that feeling again one day.

“I take a lot of confidence from this game. It was my first goal and I also managed to get two assists so I’m very happy with my performance.

“There will be a lot of opportunities in the Europa League. That’s how I made my debut last season and I hope I can continue to get more and more opportunities and keep progressing so I can maybe one day play in the Premier League and start playing for Arsenal’s first team.”

Saka, who revealed he had video-called his father from the changing room at full-time, also has an idol whose own career is acting as a further influence.

“Cristiano Ronaldo,” he replied when asked who he admired.

“I love his mentality, he always wants to be the best, always working hard on and off the pitch, trying to make his body the best and when he gets on the pitch he performs with full confidence and full personality and shows why he’s one of the best players to ever play football.