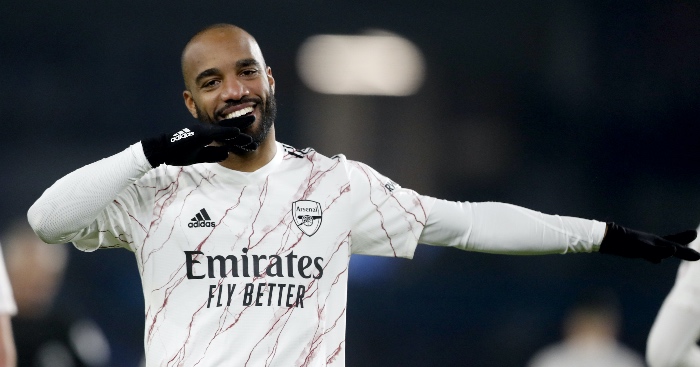 Arsenal striker Alexandre Lacazette is the subject of interest from Real Madrid and Atletico Madrid, according to reports.

Lacazette has been in good form recently, scoring four goals in his last four league matches.

He is set to receive a new contract in North London in the summer.

According to Spanish source AS (via talkSPORT), both Real and Atletico are interested in bringing the player to Spain.

Lacazette has been linked with Atletico in the past and it seems they have reignited their interest in a move.

The report states that the Spanish giants want to capitalise on a ‘strained relationship’ between Lacazette and Arsenal boss Mikel Arteta.

It’s thought that the 29-year-old isn’t part of Arteta’s long term plans, despite his recent upturn in form.

The Gunners are targeting Brentford striker Ivan Toney as a potential replacement.

That would allow Real and Atletico to make a bid for their target.

Lacazette’s current contract is set to expire in June 2022, meaning they could sign him for a reduced fee soon.

Arsenal began contract talks with the player recently, although they’ve now been shelved until the summer.

If a new contract doesn’t emerge then Lacazette could make a big money move to the Spanish capital.

Diego Simeone’s Atletico are in the market for a new striker after terminating Diego Costa’s contract.

Simeone has Angel Correa and Luis Suarez at his disposal, alongside recent signing Moussa Dembele.

Signing Lacazette would give him an extra option going forward.

Real, meanwhile, are looking for backup for Karim Benzema. Mariano Diaz looks set to leave the Bernabeu and is being targeted by West Ham.

They’ve sent Luka Jovic back to former club Eintracht Frankfurt on loan after the player failed to make an impact under Zinedine Zidane.

Given the money available to Zidane, and their prowess in the transfer market, Atletico could be the most likely destination for Lacazette.