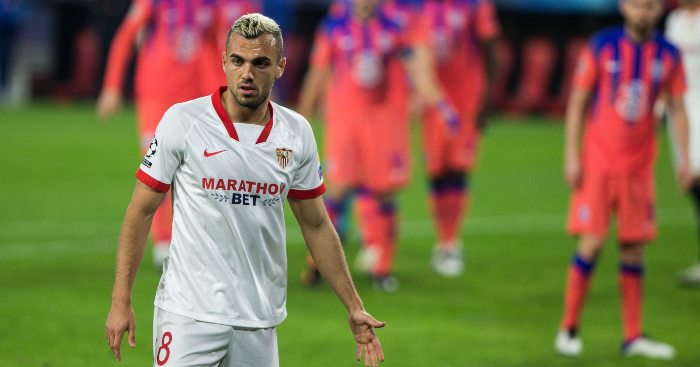 Arsenal have suffered a major blow in their pursuit of Sevilla and Spain midfielder Joan Jordan.

The 26-year-old was first linked with the Gunners in late December after impressing in his home country.

But he’s now responded to the transfer rumours by playing them down.

Speaking to Spanish outlet Estadio Deportivo (via Goal), the player said: “In the end, these are just things that come out, like the many things that were said, the rumours, when I was at Eibar.

“I have always been very clear about the present. My mind is genuinely here in Sevilla. I am at a super ambitious club, and I have nothing more to say because I really am comfortable here, like I was when I arrived.

“Things can come out, but I tell you my mind today and the people that know me can back me up, it’s not that I’m avoiding the question just that really, my mind is on the derby.”

Jordan seems settled with Sevilla and doesn’t look like he will leave Spain this season.

His release clause currently stands at £55 million as the Spanish club attempts to ward off potential suitors.

Arsenal chiefs were hoping to seal a transfer for around £32 million.

They will now pursue other options during the January transfer window. They’ve seen Dominik Szoboszlai choose to join RB Leipzig, so it looks like Emiliano Buendia is their best bet for an attacking midfielder.

The Gunners are even willing to throw in two players plus cash for the Norwich City man.

One player bound to make an Arsenal exit is William Saliba. The young centre back is set to join OGC Nice on loan for the remainder of the campaign.