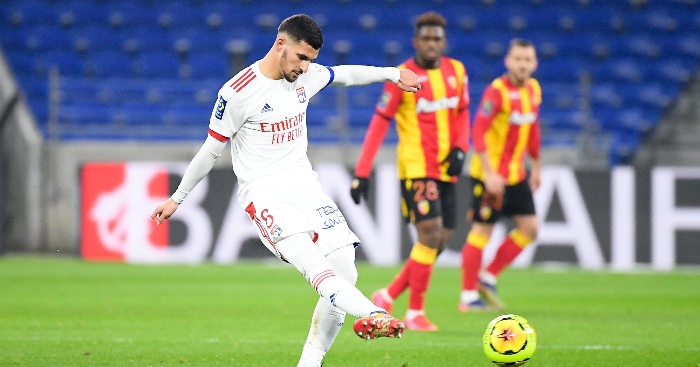 Memphis Depay believes Arsenal target Houssem Aouar wants a move to one of the ‘top three clubs in the world’.

Aouar was closely linked with Arsenal last summer as an option to replace Mesut Ozil.

The Gunners seemed to be priced out of a deal as Lyon held out for at least £70 million.

FEATURE: The five most unique goals in Premier League history

Arsenal have now been handed a further blow in their pursuit of the playmaker.

Speaking to French outlet Canal+ (via Mirror), Depay said: “We know we play for a very big club but we want to go to one of the top three clubs in the world.

“Then you will see Houssem, he will get ten times better. For me, it’s the same.”

The news means Aouar and Depay will search for a move to Europe’s elite clubs.

Barcelona, Real Madrid and Bayern Munich are now potential destinations for the pair.

Aouar is contracted with Lyon until June 2023. He’s been one of their star players in recent seasons, which lead to the interest from Arsenal.

Depay, meanwhile, is being linked with a move to Barcelona. Compatriot Ronald Koeman is manager of the Catalan giants and is thought to be a big admirer of the forward.

He wants to sign Depay to prepare Barcelona for life without talisman Lionel Messi.

Both Depay and Aouar look set to end the season with Lyon first. When asked about his future recently, Aouar said: “I do not see how I could be unhappy in my city, in my club. That is something that I do not understand.

“I am very happy to be here, I took the decision to stay with the club that formed me, I savour every day I have here.

“Everything that I want, is to put this club back in its rightful place with my team-mates. I am very happy to be here, we have an enormous amount of ambitions for this season.”

Arsenal could lose out in the race for Aouar to one of Europe’s biggest clubs.