Home F365 Features Arsenal to Huddersfield: A statistical look at every club 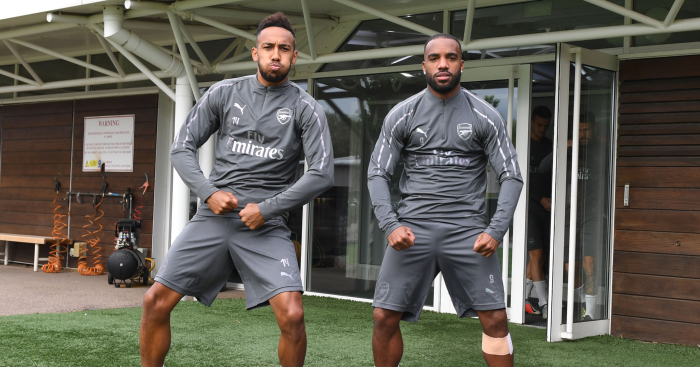 With nearly a third of the season played, the numbers are starting to mean something – in many cases all too well. Today and tomorrow we’ll look at some of the most interesting stats for each team. In unimaginative alphabetical order, today it’s Arsenal through to Huddersfield…

Early in the season, stats people were telling everyone that Arsenal weren’t as good as their results, and were subsequently being told to shut up. Well, Arsenal’s ‘underlying numbers’, as the phrase goes, remain amazingly ordinary. They have a super-duper-high 17.9% conversion rate (the record for a season is 17.1%), but they’re only 13th in total shots, and are over-performing xG at stratospheric levels.

Set-pieces are an important part of the disparity. The Gunners have scored five set-piece goals, only one behind joint leaders Liverpool and Tottenham. But they’re second-lowest in shots from set-pieces. When and if open play production falls in line with xG, they might need to work harder on dead-ball situations.

Defence is not much better: only five teams allow more shots. One positive stat is PPDA (passes per defensive action), the most basic stat for measuring the press. Arsenal are best in the league in that category, although their raw number, 8.45, isn’t that much better than last year’s 9.13, when they were third best. The shots numbers tell us that when the opposition breaks the press, it’s a real problem. But you knew that already.

We think of this year’s Cherries as a free-scoring bunch, and indeed they’re fifth in goals scored. But they’re only tied for 10th in open-play goals, just above non-free-scoring Newcastle. Set-pieces, a traditional Bournemouth strength, are a big help: they have five set-piece goals and are creating more chances from corners than anyone else.

The biggest help, though, has been penalties. In 12 games, Bournemouth have been awarded six penalties, and scored five. No other team has scored more than three. That rate won’t continue.

But one rate which might continue is their conversion rate of 13.7%, hugely up from last year’s 9.7%. That’s no fluke, because they’re getting much better shots off this season. The telling stat is xG per shot, where they’ve jumped from a below-average .082 to an outstanding .129. That’s the exact same as Liverpool. For comparison, Chelsea are at .107, Arsenal .117, Manchester City .141.

That’s scary. And yet Brighton sit comfortably in 12th place, on pace for 44 points. West Brom under Pulis finished 10th, with 45 points. No problem, if the fans are happy.

But here’s something scarier: Brighton are dead last in shots, with only 7.8/match, which would be the lowest total ever recorded for a whole season. Like Bournemouth, they’ve been helped out by set-pieces (5) and penalties (3). But they’ve taken 59 fewer shots than Bournemouth. It’s hard to believe they can stay mid-table without creating more opportunities. Maybe get Pascal Gross fit and back in the lineup?

One of the stories of the season is the collapse of Burnley’s defence. They’re on pace to allow 79 goals – 40 more than last year. Their xGA is worst in the league, one which includes Fulham. Last season they allowed 15.0 shots/match, not great, but this year it’s 21.1, which would be the highest ever recorded. No side has ever allowed as much as 20 over a full season.

To make things worse, the shots they’re allowing are more dangerous. Expected goals per opposition shot are up from an above-average .087 to a below-average .101. The Burnley blockers are still in fine form – in fact, blocks are up from 5.0 to 7.1 per match. But you can’t block everything. And in case you’re wondering, Joe Hart ranks in the middle of the pack for shot-stopping. Last year Nick Pope was second only to David de Gea.

As for the attack, the key numbers are troublesome. Shots/match have dropped from 9.9 to 8.1, ahead of only Brighton. Shots on target/match have declined from 3.4 to 2.5, below everybody. The other indicators suggest the Clarets are attacking at a similar rate to last year, they’re just not creating the same opportunities. The odds are on a relegation slog.

When you think Cardiff, you think long ball, and the Bluebirds are doing their best to confirm your thoughts. At the moment they’re contesting 53.9 aerials per match, which would be the highest ever recorded. All those long balls mean a low pass-completion percentage: right now they’re at 64.9%, the lowest since Stoke City finished the 2010/11 season at 63.4%.

That kind of strategy usually includes set-piece proficiency, and Cardiff are second in the league for shots from set-pieces. The shots are high-quality too, with an xG/shot value of .125. At the moment they’ve only scored three goals, but if they continue to create those kinds of chances, they should get more frequent results.

In defence, Cardiff are allowing only 12.9 shots/match, a solid 10th in the league. But on average they’re allowing higher-quality shots than anyone except Southampton, and Neal Etheridge ranks near the bottom in shot-stopping. As a result, opposition conversion rate is a huge 16.1%, the highest in the league.

The Blues are out-Pepping Pep, recording nearly 500 passes more than Manchester City so far. But as noted in the Bournemouth section above, City are creating much better chances. Still, Chelsea are a solid second in shots, closer to first-placed City than third-placed Liverpool.

A lot of those shots are missing the target, though. Chelsea’s shot accuracy is 32.7%, only 14th in the league. A lot aren’t getting through, either: they’ve had 33.6% of their shots blocked, more than anyone. That’s not as bad as it looks, though, because good sides often have shots blocked by packed defences. City have had the third-most blocked.

The oddest Chelsea stat is that they lead the league in chances created through long passes. That would suggest good counter-attacking, but they live by possession, and their various counter-attacking stats are unremarkable. For comparison, Man City are 15th. So that’s something to watch.

Last season Palace scored 45 goals, tied for ninth in the league. This year they can’t find the net with a telescope. Only Huddersfield have scored fewer goals; only Huddersfield and Southampton have a lower conversion rate. It doesn’t help that Palace are the only side yet to score from a set-piece. I’d say they’re missing Christian Benteke, but [pick your own punchline].

Who they’re missing more is Yohan Cabaye. Key passes are down 11.4% from last year, not a negligible drop. Moreover, shot quality has dropped significantly, from .108 xG/shot to .081. That averages out to a likely 12 goals fewer based solely on where they’re shooting from. Add in the poor conversion rate, and you’ve got only six non-penalty goals in 12 games.

You don’t need a stat freak to figure out that Wilfried Zaha is the alpha and omega of Palace’s attack. But a stat that nails it down is that Palace have taken 31% of their shots from the left side. This is not only far and away the most lopsided attack in the league, it would be far and away the most lopsided attack on record. The current high mark for one side is 25%.

The Toffees are owners of one of the most surprising stats of the season: they’ve had more headed shots than any other side, 42. Just as surprising is that it’s not that close. Leicester City have 39, and third-place Tottenham 32. The reason is that Everton have taken the most shots of any kind from set-pieces. Michael Keane is the poster boy, racking up 15 set-piece headers, the most in the league. With Gylfi Sigurdsson delivering, perhaps it’s not actually all that surprising.

Perhaps opponents should stop fouling them, then. Everton have been fouled more than any other team, and the gap between them and second-place Bournemouth is huge. I have no explanation: times fouled is a stat that seems to bounce around teams fairly randomly.

We know the bad news about the defence, so let’s talk about the attack, which isn’t terribly good either. Despite being sixth in the league in total shots, Fulham have scored only 11 goals, and one reason is that they’ve taken a mammoth 54% of their shots from outside the area. André Schürrle is the worst offender, taking 73% of his shots from outside the box, which for a winger is absurd. For comparison, we have Roberto Pereyra with 18.2%, Anthony Martial 28.6%, Leroy Sané 35.3%, Willian 42.1%, and Ryan Fraser 47.4%.

Another attacking difficulty is that they’ve been caught offside more than any other team except (actually, I’ll save that surprise for tomorrow). You’ve probably heard about Alvaro Morata’s little problem, but Aleksandar Mitrovič is close behind in that category, with 13 offsides to the Chelsea forward’s 15.

A few words on the defence. They’ve underperformed xGA by almost six goals, which means they’re not as bad as they look. But they’re still bad. That xGA, although a little behind Burnley’s, is about five goals worse than anyone else. Their opponents have converted shots at a rate just below Cardiff’s, too. Under Claudio Ranieri all this will change, presumably – he’s already said the clean sheet comes first. In bocca al lupo!

The most staggering stat is that in 12 games, the Terriers have managed only one shot from inside the six-yard box. (It was taken by Jon Gorenc Stankovic from a long throw-in against Man City. It went in.)

Oddly, Huddersfield are actually getting more shots/match than last year, up from 9.5 to 10.7, and more key passes/match, up from 6.9 to 7.3. But xG/shot has dropped from .086 to a nearly invisible .062, and partly as a result, their conversion rate is down around Southampton’s, at only 4.7%. That would be an all-time record low if it lasted the season.

There are a few positive signs: the press is putting up good numbers (PPDA fourth in the league), and the side have given up only 12.8 shots/match, tied for 10th. The flip side is that opponents are getting fairly high-quality shots, almost the exact same xG/shot as last season. Opposition conversion rate is up from 13.2% to 14.4%, too. It’s a team on the edge, but as long as you’re on the edge, you haven’t fallen over. Yet.