Home Arsenal Arsenal triumph in the face of absurdity… 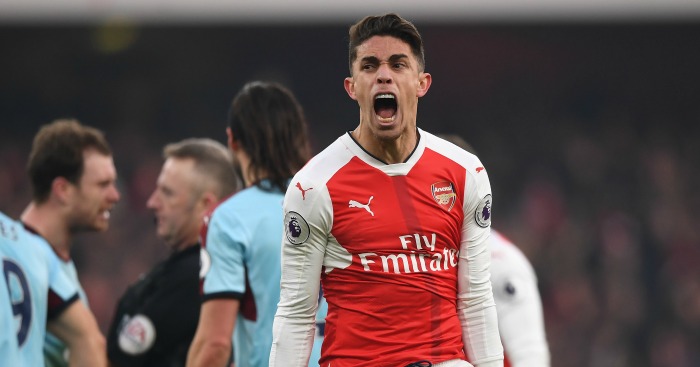 At 1-0 I was writing about Shkodran Mustafi and the novelty of Arsenal making a sensible, expensive signing that works.

At 1-0 and Arsenal down to ten men, I was writing about the Gunners winning despite the predictable stupidity of Granit Xhaka.

At 1-1 I was flip-flopping between making Xhaka or Francis Coquelin our ‘Early Loser’, with a strong case to be made for turning all the guns on Arsenal.

At 2-1 I was just saying the words ‘f***ing hell’ over and over again and wondering just how late goals they have scored this season. Apparently, it’s the mark of champions.

The answer to that question is that Arsenal have scored 12 Premier League goals scored after the 80th minute, which makes them thrilling, fascinating and lots of other wonderful things, but it seems unlikely to make them champions. Which is a shame because Alexis Sanchez, Mesut Ozil, Shkodran Mustafi and Laurent Koscielny probably deserve to be champions; others deserve nothing more than a paddling for inexcusable stupidity and naivety.

There are those who believe that the red card shown to Xhaka was harsh, but surely nobody can argue with the notion that the Swiss midfielder is prone to making ridiculous decisions likely to end in either penalties for the opposition or red cards. Including one international red, Xhaka has notched six in less than two full seasons. That’s not draconian refereeing or bad luck, that’s a footballer with a lack of control and maturity. It’s astonishing that Xhaka is the same age as Mustafi; one is a 24-year-old man and leader of other men and the other is a 24-year-old boy doomed to habitually let down his parents, his school and most of all himself.

Xhaka’s replacement – in terms of position at least – was Coquelin, a player who has become a walking, fouling liability. Newly rewarded with a presumably more lucrative contract, the Frenchman celebrated in predictable fashion with a tackle in the box that should be flattered to be called ‘clumsy’. Arsenal had only ten men but they were never in any real danger, the gulf in class being apparent even after Arsenal lost the third most expensive central midfielder in world football through extreme numptiness. Burnley needed a gift to equalise and Coquelin was as generous as his employers.

I strongly criticised Arsenal after a 3-3 draw with Bournemouth in which the comeback masked the incompetence that came before, but being marginally more potent than they are stupid is building some semblance of a title challenge. They may have conceded more penalties (7) than every other Premier League side bar Hull, but they have also scored more goals (50) than every Premier League side bar Liverpool. For all the fuss about Jurgen Klopp’s dynamic Reds, they are only one goal ahead of Arsenal now.

This is a better side than the Arsenal that were atop the table a year ago – in terms of that immeasurable quality of resilience as well as the measurable statistics of points and goals scored. Mustafi is a considerable upgrade on Per Mertesacker, Alexis Sanchez has stepped up again to become arguably the best player in the Premier League and a bench featuring Danny Welbeck, Alex Oxlade-Chamberlain, Hector Bellerin and Lucas Perez is possibly the strongest in the top flight. In most other seasons, Arsenal would not be 10/1 outsiders for the title.

But there is a reason that the Chelsea fans watching the game on the big screen at Stamford Bridge loudly cheered Burnley’s equaliser and then stood in silence for Alexis Sanchez’s winner; there is something about this Arsenal side, and it’s not just their capacity for shooting themselves in the foot.