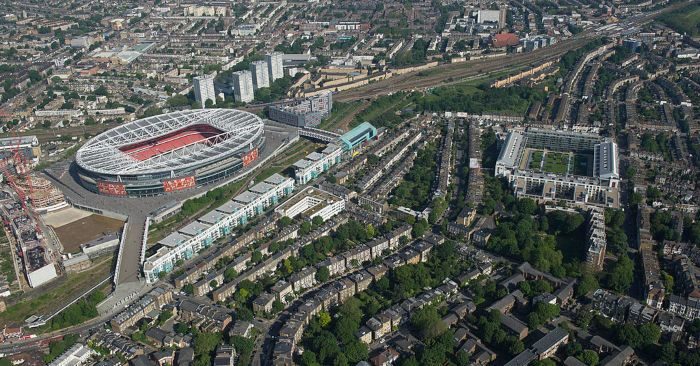 2006 and Arsenal play their last game at the Highbury stadium. The groundsman mows the award-winning pitch at the beautifully mismatched art-deco football ground and smiling fans deck the stands in red and white stripes for one last hurrah.

There’s a countdown with fireworks and a timer on the move from the Gunners’ home for 93 years to Ashburton Grove, a few hundred yards away. They actually cheered when the clock reached zero. They are not cheering now.

In football, a hundred yards is a long way, the difference between a well-placed pass and a hit and hope punt. Cut forward to 2019 and miserable Arsenal fans rant in the street for interim manager Freddie Ljungberg to move on after losing to Brighton. They did it a week ago to rid the club of Unai Emery and some did it to see Arsene Wenger fired. You can’t blame them; devoid of any real say in how the club is run, getting a manager sacked is their one show of power.

They don’t have much fan TV in Germany. They think it’s a bit naff, but with 50+1 fan-ownership as standard, they don’t have owners like Stan Kroenke either.

There’s not even the beginnings of smiles as fans of the sad club go through their unhappy Arsenal Fan TV rituals. How can a club that appears to have it all – a huge stadium, a billionaire owner and superstar players – have, in reality, not much at all?

It’s a thoroughly modern football story of love, loss and the stripping away of what it means to be an English football fan. Oh Highbury, enough to bring a tear to the eye of fans who don’t follow Arsenal. The comedian Paul Kaye did a lovely BBC video about his rituals as a Highbury match goer, taking in some of the backstage delights designed by Claude Waterlow Ferrier, but also the staircases and the bagel window and that bright green pitch and those unique, compact stands.

Herbert Chapman was a 1920s visionary, bringing along Arsenal’s reputation as pioneers, except that the Gunners fell foul of the new millennia nonsense that to “compete” Arsenal had to join the super stadium arms race. Being visionary means not going along with a crowd but that’s what the new bowl brought: an extra 20,000 seats made a whole different club indistinct from so many others. Arsenal are now in the top two for match-day revenue but 10th in the top flight. It doesn’t always compute.

That move to the Emirates came at the expense of poorer supporters, already beginning to be priced out as the Premier League kicked in but the tin hat put on the process with season-ticket prices well into the thousands. Highbury turned into expensive flats in a country where food banks are rife and people have to claim benefits while in work. The rich don’t produce culture, fan or otherwise, they consume it.

Those old-school fans, who distance themselves from the fan TV hysteria, saw it coming, forming the Black Scarf Movement and marching to the Emirates in 2012 with a banner that read ‘Let’s Kick Greed Out Of Football’. “I’m Arsenal till I’m skint” they chanted wryly past a train station named after the club whose stadium is named after a UAE airline.

Wenger is never far from it all, winning all his major silverware on the pitch that they “had to” leave, then trawling round London with David Dein for a new site, from Wembley to London Colney on the M25.

The Gunners are stuck in Big Six purgatory where they don’t even get the relief of relegation to the Championship to refocus. How will they explain to their fans if, as American architects are saying, super stadia become old hat and that clubs will build bijou grounds in the future, embedded in community, arriving back at what they had in the first place? The classy club with the class in the past.

“Ooh to be a gooner” is the chant that used to mean something; they had a team that was invincible. You wouldn’t want it now, would you?