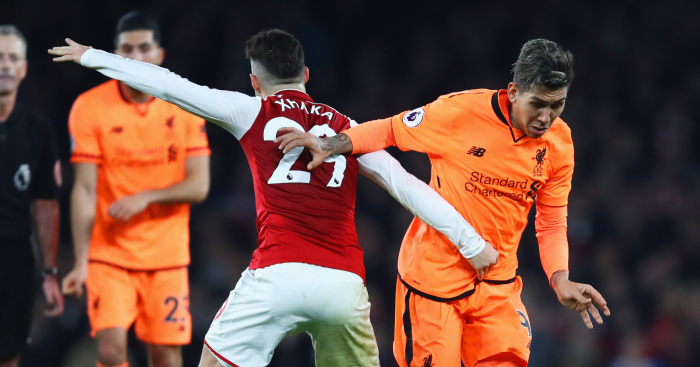 Unai Emery and Jurgen Klopp have faced each other just once. The 2016 Europa League final, when Sevilla beat Liverpool 3-1 in Basel, was a thrilling end-to-end encounter. There is every reason to believe Arsenal v Liverpool will be similarly enjoyable, despite the fact Liverpool’s recent draws against Chelsea and Manchester City defied lofty expectations. The Gunners are even more wildly chaotic than Liverpool were in top-six clashes last season.

Arsenal’s two biggest flaws, namely their difficulties in passing out from the back and an inability to halt opposition counter-attacks, could hand Liverpool a major advantage. Not many Arsenal fans will be confident about Granit Xhaka’s role against Klopp’s Gegenpressing tactics.

But this won’t necessarily be a one-sided affair. Mismatches on the flanks and a clash of formations should ensure we see goals. How they’re shared is anybody’s guess.

Here are five tactical questions ahead of Saturday’s game, from which we will have 16 Conclusions.

1) Will Arsenal’s passing out from the back favour Liverpool’s Gegenpress?
A frequent issue for Emery this season has been Arsenal’s error-strewn build-up play from goal kicks, and since the hosts will probably show greater caution than usual from open play, their passing out from the back could be decisive. Things have improved since Bernd Leno came in for Petr Cech, yet Arsenal still look shaky when the back four are asked to string passes together.

This will inevitably play into Liverpool’s hands. The visitors don’t press quite as furiously as they used to, often engaging only for short bursts before falling into a deeper, more protective shape. However, they won’t be able to resist the temptation to go all guns blazing at the Arsenal defenders; poor first touches, and the need for several seconds on the ball before releasing, means Shkodran Mustafi and Sokratis are likely to be caught by the Liverpool swarm.

2) …or will it catch Klopp’s team too high up the pitch?
Then again, goal kicks could end up being Arsenal’s most effective form of attack. Emery insists on playing out from the back so that opponents are drawn forward, which in turn means Arsenal can suddenly increase the tempo and burst in behind.

Counterintuitively, all those nervous, misplaced passes have actually helped the Gunners, lulling teams into a false sense of security by drawing them further and further away from their own goal. This helps explain why Arsenal score a high proportion of their goals late in the second half: emboldened opponents find themselves level at half-time and, smelling blood, over-commit in the second period.

To evade the Liverpool forwards, Granit Xhaka and Lucas Torreira will need to work particularly hard to show for the ball, dipping into spaces between Liverpool’s press with authority. To do so successfully would take several Liverpool players out of the game, providing Arsenal with exactly the sort of counter-attack scenario in which they thrive. Torreira, when confident, is particularly adept at turning on the ball or spraying neat, one-touch passes out wide when put under pressure. The Uruguayan will, therefore, be arguably the most important player on the pitch.

3) Will mismatches on the flanks give us an end-to-end game?
Quite often when two high-line teams meet we get a claustrophobic, low-scoring encounter. This is because the pitch becomes compressed virtually to half size, and with organised pressing from both teams, neither quite find their rhythm.

That seems less likely to happen at the Emirates because of mismatches on the flanks. Both teams will quickly move the ball out wide to isolate vulnerable full-backs, which should decompress the middle of the park and – assuming the quick wingers can win their one-on-ones – ensure attacks move seamlessly from end to end.

For starters, Sadio Mane versus Stephan Lichsteiner is a problem. The 33-year-old looked his age when kicking Wilfried Zaha around last weekend and the Swiss right-back, likely to deputise for the injured Hector Bellerin, may struggle to cope with such a demanding encounter on Saturday. On the other side, Mohamed Salah is finally looking sharp again, meaning he should be able to dribble past the returning Nacho Monreal. Arsenal’s left-back rarely looks comfortable in one-on-one situations, a problem likely to be exacerbated by the his lack of match fitness.

At the other end, Pierre-Emerick Aubameyang‘s inside runs could trouble Trent Alexander-Arnold. Trent was dropped for the Man City match because of his increasing mistakes (mostly positional), and so Aubameyang’s complex movement would certainly cause issues on that side. Even if Joe Gomez starts on the right, that would create a whole new issue in Dejan Lovren v Alexandre Lacazette. Both sets of attackers hold an advantage on the flanks, which should prevent the pitch from becoming too cluttered for entertainment.

4) How will a Xhaka-led midfield cope with the transitions?
Arsenal’s second major concern is dealing with transitions from attack to defence. Too often this season opposition sides have broken through the middle with ease, exposing Emery’s high defensive line, the width between midfielders, and the overly-attacking full-backs. The energy in Liverpool’s midfield three is worrying enough, but Matteo Guendouzi’s suspension rings alarm bells for Arsenal fans. Granit Xhaka will be back in central midfield.

Even if Arsenal evade Liverpool’s initial pressing they will remain vulnerable when deep in the Reds’ half. Fabinho, James Milner and Georginio Wijnaldum offer speed and guile on the breakaway, quickly distributing to a front three that will most likely find themselves matched up evenly in numbers with the Arsenal back line. If Emery is to avoid this situation he’ll need Xhaka to have the game of his life – and even then Liverpool should overwhelm and dominate in central midfield.

Crystal Palace created numerous chances on the counter in their 2-2 draw with Arsenal at Selhurst Park despite both Torreira and Guendouzi sitting deep in the middle; the lines are simply too disconnected for Arsenal to maintain control. Keep an eye on Roberto Firmino dropping off the front line. The Brazilian could run the match from behind Xhaka’s back.

5) Are Liverpool vulnerable to Arsenal’s vertical passes to the inside forwards?
In typical Emery fashion, an important part of Arsenal’s build-up play – or rather, their sudden switch from prosaic passing to a burst of direct football – is playing a vertical pass through to wingers that have drifted infield into the half-spaces. Although nominally a 4-2-3-1 formation, Arsenal’s full-backs occupy the wider areas and the wingers come infield, ghosting off the back of the central midfielders to become auxiliary number tens.

Liverpool’s 4-3-3 may make them surprisingly vulnerable to this, particularly if Klopp’s side are indeed lured into believing they can blow Arsenal away. That’s what happened to Chelsea, who conceded four or five big chances before eventually letting in two goals at Stamford Bridge.

Wijnaldum and James Milner are expected to cover the width of the pitch (Salah and Mane rarely track back), which could leave big gaps between the Liverpool midfielders for Arsenal to thread long ground passes into Aubameyang and Alex Iwobi. Arsenal’s success with this strategy will determine whether or not Mesut Ozil – anonymous unless supported – gets a foothold in the game.

If you enjoyed this – and hey, even if you didn’t – feel free to give us and our very own Johnny Nic some love in the FSF awards. Head here to vote…