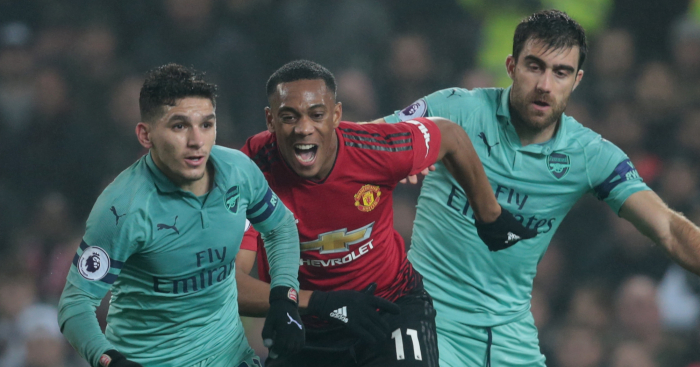 The tactical pattern of Friday’s FA Cup fourth-round tie between Arsenal and Manchester United will be defined by what formation Unai Emery decides to use; the diamond 4-4-2 deployed against Chelsea worked brilliantly, yet Arsenal’s defensive concerns may see them revert to a 3-4-3 that has failed to convince.

Either way, it should be a good game. Ole Gunnar Solskjaer will know that lifting the FA Cup would be a good way to move his name up the shortlist, while Arsenal are expected to play a full-strength side: the battle for fourth spot in the Premier League is, after all, as much a psychological as a physical one.

So here are five tactical questions ahead of Arsenal v Manchester United:

1) Is Arsenal’s diamond 4-4-2 the perfect system to attack Man Utd?
Emery’s surprise formation change last weekend proved to be a masterstroke. Arsenal dominated in all areas of the pitch thanks to a system that managed to maximise the talents of pretty much every individual member, which perhaps means the system is here to stay. It’s certainly worth breaking down exactly how and why it worked so well against Chelsea.

First, the Mesut Ozil-shaped hole was fixed by deploying Aaron Ramsey at the tip of the diamond. After several weeks of aimless possession football from Arsenal, Ramsey scuttled across the width of the pitch to nealty link the forward and midfield lines. In the past, playing Ozil or Ramsey has created too much work for the pair of central midfielders behind them, but on Saturday the diamond shape meant Arsenal maintained firm control in the middle of the park.

Matteo Guendouzi and Lucas Torreira were surprisingly effective in wider roles, their box-to-box instincts serving them well as Arsenal created a square shape to suffocate Chelsea’s midfield. This could work very well against United given Solskjaer’s reliance on Jesse Lingard and Paul Pogba drifting infield into the half-spaces. There won’t be much room for that.

Granit Xhaka also benefitted from a simpler, deeper role, often dropping back to form a back three so that Arsenal’s full-backs could bomb forward (they also benefitted from the diamond shape because it sucked both sets of players inwards, freeing up the flanks). Again, this seems a good way to push back and control United’s own marauding full-backs, who have significantly grown in influence since Jose Mourinho’s departure.

2) Will Pogba and Rashford expose the defensive vulnerabilities of the new formation?
But for all its advantages, the diamond 4-4-2 may prove to be too porous at the back to stop such an assertive United attack. Arsenal have constantly struggled to close the gaps at the back when playing in a four – and do we really trust Xhaka’s positional play against Marcus Rashford, Anthony Martial and Pogba?

It’s easy to imagine a scenario developing similar to Rashford’s winning goal at Spurs, in which Solskjaer’s high pressing won United the ball before Pogba released Rashford with one delightful through ball. Their partnership has matured under the new head coach, largely because Pogba is now freed from defensive responsibilities and unleashed into something closer to a No. 10 role. Solskjaer has given Pogba the psychological and tactical freedom he has always craved, nurturing his confidence by treating the man like a star. That sort of absolute trust from manager to player takes bravery and humility. Solskjaer deserves a lot more credit than he’s getting.

Arsenal’s defenders are renowned for their substandard passing under pressure, meaning Pogba may end up seeing a lot of the ball in dangerous areas. Leaving out a third centre-back might be too big a risk for Emery.

3) Or will Bellerin’s absence cause Emery to reinstate an awkward 3-4-3?
Hector Bellerin’s injury further complicates matters. Time and again this season Stephan Lichtsteiner has shown he is unable to match the speed or agility of Premier League football, meaning he will need that third centre-back behind him as cover. But to reinstate Emery’s 3-4-3 would be to sacrifice creativity in central attacking midfield and risk more aimless possession down the flanks. Perhaps Ainsley Maitland-Niles is the answer?

Arsenal’s 1-0 defeat to West Ham was characterised by the visitors shuttling the ball between wing-back and inside forward to no avail, failing to carve open an organised Hammers defence while at the other end Samir Nasri showcased exactly what Arsenal were missing. Emery’s tactics require a subtle passer who can control the tempo and launch direct counter-attacking darts in behind the defence.

Instead, Pierre-Emerick Aubameyang offered little from the right and Alex Iwobi, after initially wandering into the middle only to find himself isolated, ultimately spent too long trying give-and-gos with Sead Kolasinac.

United will happily absorb the sort of low-tempo pressure West Ham endured. The final 20 minutes at Wembley – when United had their backs to the wall – proved that two years of Mourinho coaching will linger in the muscle memory.

4) Do Solskjaer’s high-pressing instincts play right into Emery’s hands?
A diamond 4-4-2 is probably worth the risk, then. Another major benefit of Emery’s new formation is playing Aubameyang and Alexandre Lacazette in their correct positions, allowing for their natural partnership to flourish and limiting the need for either to come deep to link the play. That gives Arsenal the raw pace to make the most of counter-attacking opportunities. There will be plenty on Friday.

United will once again press high, fearlessly and vehemently playing the ‘United way’ at all costs under the caretaker manager. Spurs just couldn’t break out quickly enough to expose United’s high defensive line, but Emery’s Arsenal are specifically designed to make the most of these situations.

Like most modern managers Emery instructs his players to pass out from the back, but unlike many of his peers Emery’s plan is to draw the opposition forward and lure them into a trap. Possession is prosaic…until all of a sudden it isn’t, and within two or three one-touch passes Arsenal find space in behind. As Lacazette and Aubameyang lurk up front, and with United looking to play in an attacking style with Phil Jones as one of the centre-backs, Solskjaer may naively play to Emery’s strengths.

5) Will Martial versus Lichtsteiner be the game’s key battle?
Let’s return to Lichtsteiner who, if picked ahead of Maitland-Niles, will be the least talented player on the pitch and therefore a chink in the armour regardless of the formation Arsenal choose. His direct opponent on Friday is Martial, exactly the kind of direct dribbler who will strike fear into a right-back seemingly unable to keep up with the flow of English football.