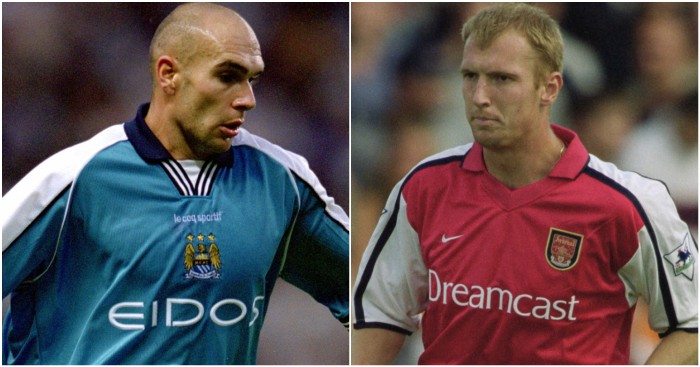 Three at the back is all the rage, so this miserable lot are set out in a 3-5-2 formation. The only criteria is that the player must have appeared in an Arsenal v Man City Premier League match since the year 2000, to make it vaguely relevant…

The Faroe Islands stopper made it off the bench to replace the injured Shay Given when City held Arsenal to a 0-0 draw in April 2010. That was Nielsen’s only action in over three years at the Etihad and he hasn’t seen a great deal since. Seven years later, aged 30, he is yet to crack 100 senior appearances. City released Nielsen in 2012, before bringing him back for pre-season, then bombed him again when they signed Richard Wright to do nothing instead.

The former France international didn’t disgrace himself during his first season at Arsenal, when he played 28 games after joining for £4million from Sevilla. His second and third seasons were a different story, however, given he made just one Premier League appearance. But the centre-back was on big money and more than content to sit on his backside for the remainder of his three-year contract. For Arsenal fans, even that was more preferable to seeing him in the team.

CB: David Sommeil
The French defender created a little bit of history by scoring the first Premier League goal at the City of Manchester Stadium but that’s all City fans will remember him for. Tottenham’s Lee Young-Pyo probably hasn’t forgotten Sommeil, though, after the centre-back was banned following what Martin Jol described as an “horrific” tackle on his player. Even Stuart ‘Psycho’ Pearce thought Sommeil crossed a line: “It was a poor tackle and I will have a chat to tell him it is unacceptable.”

“He was a unit, but seriously, he was not up to standard.” That was Ray Parlour’s verdict on Stepanovs, with Parlour claiming in his autobiography that the Latvian was signed as a result of the Arsenal squad winding up Martin Keown. It certainly looked an elaborate practical joke when he was part of the back four destroyed 6-1 by Man Utd at Old Trafford in 2001. He made 17 Premier League appearances for the Gunners, and his record since leaving Highbury suggests Parlour’s assessment was correct.

The Frenchman turned down Ipswich and Charlton to sign for Joe Royle, though City fans wish he hadn’t. Charvet actually started well under Royle but when Kevin Keegan arrived, the then-28-year-old was effectively finished at City. He made only three apearances for the former England manager before being released and allowed to join Sochaux.

The former Arsenal left-back played for Brazil on 24 occasions, but given Roque Junior has 48 and Gilberto (the Spurs trainwreck, not the Arsenal midfield machine) possesses 35, it seems these days Selecao caps are tossed around like confetti at the Rio Carnival. Santos is best remembered for three things: being a dreadful left-back; swapping shirts at half-time with Robin van Persie after a first-half horror show at Old Trafford; and being attacked by his own fans during a spell at Flamengo.

The French midfielder was hailed as quite the coup when he arrived on a Bosman from Lazio in 2006, but in his 18 months at City, he made only 10 Premier League appearances; got himself sent off; suffered a knee ligament injury; and was the victim of a vicious assault from Joey Barton. “He used to smoke cigarettes and seemed to me like he didn’t give a f*ck about his football,” said Barton after. “He was just picking up his money and was over in England on a jolly up.”

The Algeria international made his full City debut at the same time as fellow flop Sommeil, with his only other start coming in the 5-1 home thrashing by Arsenal in February 2003. Belmadi managed only eight appearances and no goals in his loan spell from Marseille, during which time, two members of staff at his bank were dipping into his account, and those of team-mates Daniel Van Buyten and Vicente Vuoso, to help themselves. Maybe they were just City fans looking to get their ticket money back. Belmadi returned to England for an unsuccessful spell with Southampton before moving into coaching in Qatar.

McManaman was hero at Liverpool and Real Madrid, but by the time he rocked up at City to play for Kevin Keegan, he was finished. Joining Robbie Fowler and David James’ in the Spice Boys’ reunion tour, he made a promising start which was soon curtailed by injuries, poor form and off-the-field headlines. McManaman saw out his £35,000-a-week two-year contract, making 35 appearances, scoring not a single goal, before putting his feet up more officially in retirement.

Jeffers later said of his £8million move to Arsenal: “It was definitely too soon and probably the wrong move.” Probably?

The former England forward was obviously not a bad striker but he had already played the best football of his career by the time he moved to Arsenal in 2001. With the likes of Thierry Henry and Sylvain Wiltord to dislodge from Arsene Wenger’s strike force, Jeffers found playing time hard to come by. After four goals in 22 league appearances over two seasons, Jeffers returned to Everton on loan, but he never discovered goalscoring touch that previously made him one of the country’s hottest young properties.

The younger of the Wright-Phillips brothers, Bradley progressed to the first team after being top scorer in the reserves. But the striker could not make the step up, scoring only one goal in 36 appearances, most coming off the bench. He joined Southampton for £500,000 – a fee half-funded by a Coca Cola competition winner. After drifting in the Football League, Wright-Phillips moved to United States, since when he has set the MLS on fire. The 32-year-old has won two Golden Boot awards at New York Red Bulls, edging out David Villa last season.