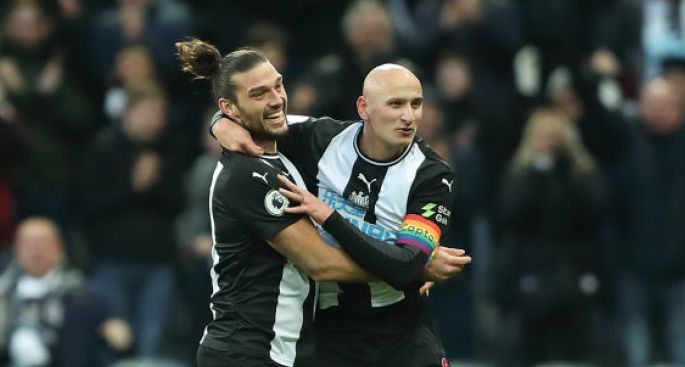 Tactical pattern
Newcastle United have gone six games without a win in all competitions and look increasingly directionless under Steve Bruce, and yet their 0-0 draw with Liverpool at the end of last month tells us this could be a close game. Their 5-4-1 formation, returning to the most successful period of Bruce’s time at the club, has given them a defensive resolve in ‘Big Six’ contests.

Arsenal could struggle to break down such a ruthlessly deep defence. Mikel Arteta probably won’t rest many players, largely because he needs to maintain momentum after a mini-revival of late, and that means the tactical battle at the Emirates will be an exhausting, one-way battle. Arsenal should just about have enough, but it won’t be easy.

Key battle zone
Newcastle’s move back to a five-man defence has strengthened their wings, and this is the key battle zone for this one. Bukayo Saka is enjoying his new role from the right flank, and certainly Arteta will need the youngster to dribble confidently this weekend in order to break the lines and draw defenders out of their regimented shell.

On the other side, Kieran Tierney’s crosses will be crucial in causing a bit of chaos. Arsenal won’t have the space to play their best football, and as the tempo drops, Arteta will need to rely on more traditional routes to goal. However, with a wing-back and an outside centre-back defending each flank, Newcastle may ultimately keep Tierney and Saka quiet.

Keep an eye on… Emile Smith Rowe
But if there isn’t space on the wings, there ought to be centrally. Newcastle are oddly decompressed between the lines this season, and the 5-4-1 hasn’t helped them take control of central areas; Bruce now has a two-man midfield, which in theory creates room for Emile Smith Rowe to continue his excellent form.

Smith Rowe has already amassed two assists from three Premier League games and averages 2.0 key passes per game, almost double the average of Arsenal’s next best creator Tierney (1.3 per game). His movement in the number 10 space is superb, and it seems unlikely the Newcastle midfield will be able to keep track of him. Smith Rowe should make the difference.

One to watch… Andy Carroll
Carroll’s brilliant late volley in the 2-1 defeat to Leicester City last weekend has probably put him in line to start this weekend’s game. His first Newcastle goal for ten years might not have affected the result, but it has given him some confidence just in time to be a hero in the FA Cup. Carroll has always been a good cup player.

Arsenal’s defence remains shaky and often lacks physicality, making them ideal for Carroll to cause havoc from set pieces. Arteta’s side aren’t very good in the air; that should worry them ahead of this one.

Back Carroll to score anytime at 11/4 (Paddy Power)