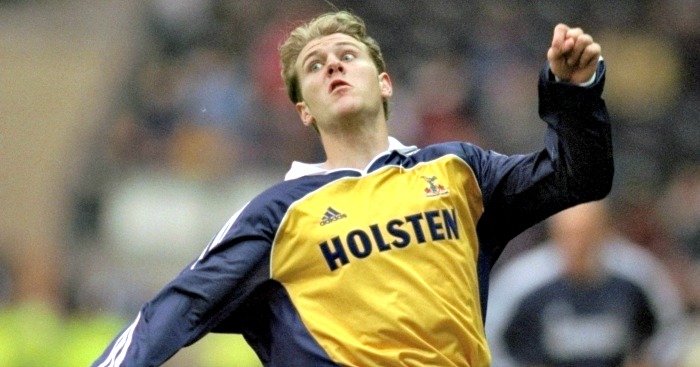 The criteria is simple: Players must have featured in a north London derby in the Premier League since the turn of the millennium. One minute as a substitute in 2000 will suffice…

GOALKEEPER: Rami Shaaban
Described as ‘a potential replacement for David Seaman’ in his player profile on the official Arsenal website, Rami Shaaban would never quite live up to the billing. A broken leg suffered on Christmas Eve 2004 curtailed his supposed rise, and upon his return from injury, there was little chance he would usurp Jens Lehmann. The Sweden international would make five Premier League appearances in all, with his debut coming in a 3-0 victory over Tottenham in November 2002.

RIGHT-BACK: Noe Pamarot
A centre-half by trade, and indeed a centre-half when helping guide Portsmouth to their 2008 FA Cup triumph, Noe Pamarot was used more sparingly as a right-back during his two-year stint at Tottenham. He played just 25 Premier League games for the club, yet played a part in one of the most memorable north London derbies in history in 2004. It is not likely something he brags about in the Pamarot household, considering the standard of the defensive masterclass both sides provided in a 5-4 Arsenal win.

CENTRE-BACK: Alton Thelwell
Arsenal boast Laurent Koscielny. Shkodran Mustafi and Nacho Monreal, while Tottenham haveToby Alderweireld, Jan Vertonghen, Davinson Sanchez and Eric Dier. Both clubs can lay claim to strong, fast, talented and well-rounded defenders in the current day, but both have endured their fair share of terrible centre-halves in the modern era.

We have had (Rocha) Ricardo Rocha. We have had Sebastien Squillaci. We have had Ramon Vega. But in terms of inadequacy, Alton towers above the rest. Thelwell started just 13 Premier League games during his five-year spell at White Hart Lane, of which Tottenhma lost eight, drew three and won just two. One of that triumvirate of stalemates was a classic north London derby in 2000, where a last-minute strike from Patrick Vieira levelled matters after Sergiy Rebrov’s first-half opener.

CENTRE-BACK: Pascal Cygan
The chant pretty much summed it up. “He’s bald, he’s sh*t, he plays when no-one’s fit, Pascal Cygan, Pascal Cygan.” Lovely. It still exists as a heartfelt tribute to the man who Arsenal owe almost all of their Invincibles season to, considering he made 18 Premier League appearances in 2003/04.

LEFT-BACK: Andre Santos
He swapped his bloody shirt with Robin van Persie once! At half-time! Outside of committing football’s most heinous act, Andre Santos managed to establish a semi-successful career in pretending to be a left-back. Think Alberto Moreno, but perhaps even worse. The Brazilian made 39 Premier League appearances for the Gunners, losing just four times, and putting on a clinic as a ten-minute second-half substitute in a 5-2 victory over the club’s bitter rivals in November 2012.

RIGHT-WINGER: Adel Taarabt
Long before Harry Redknapp would publicly brand the winger fat, Adel Taarabt was Tottenham’s rebel without a cause during the late 2000s. He was blessed with undeniable talent, but lacked the application to fulfil it. By the time of his first north London derby appearance – as a second-half substitute in a 2-1 defeat in 2007 – Spurs still held hope that the Morrocan would come good. By the time of his second – as a second-half substitute in a 0-0 draw in 2009 – it had become a contractual obligation to refer to him as a maverick. And he’s still only 27, which is something.

CENTRAL MIDFIELDER: Rohan Ricketts
In terms of ‘crossing the divide’, the north London derby has a rather rich history. From Pat Jennings to Emmanuel Adebayor, via a combination of David Bentley and William Gallas, there have been a handful of players who have featured for both clubs. Even Harry Kane, one of Tottenham’s own, was once an honorary Gunner.

Of the 15 individuals to have played for both Arsenal and Spurs, few are remembered as fondly by either fanbase as Rohan Ricketts. A trainee for the Gunners in his youth, the midfielder was handed one appearance for the club before leaving in 2002. He would move directly to Tottenham – and yet Sol Campbell is the one referred to as Judas. What about your single appearance for the club as a 20-minute substitute in a Worthington Cup win over Manchester United in 2001? Did that mean nothing to you, Rohan? Do you have no remorse?

Ricketts found playing opportunities easier to come by at White Hart Lane, often partnering one of Jamie Redknapp, Mark Yeates or Michael Brown in an eclectic collection of midfielders. He was welcomed back to Highbury with open arms in November 2003, where Arsenal secured a 2-1 north London derby win.

CENTRAL MIDFIELDER: Johnnie Jackson
Tottenham’s squad at the turn of the millennium was quite something. Past and inevitable future England manager Glenn Hoddle did what he could with Willem Korsten, Jonathan Blondel and Milenko Ačimovič, but it was often a fruitless task. The club’s starting XI for the Worthington Cup final defeat to Blackburn in 2002 contained nine players over the age of 28.

That Johnnie Jackson provided the youthful antidote to an ageing squad speaks volumes of the standard of a Tottenham side which was often found battling relegation almost two decades ago. The midfielder broke through the club’s youth ranks in 1999, but bore all the hallmarks of a Charlton stalwart in his 20 Premier League appearances. He is unbeaten in north London derbies, mind. Well, technically anyway. He started a meeting between the two sides in April 2004, but was substituted at half-time with Arsenal leading 2-0; Tottenham would recover to draw 2-2.

STRIKER: Helder Postiga
Sometimes, on a quiet day, I like to make time to stop and think about Tottenham strikers of years gone by. Hours pass as memories of Grzegorz Rasiak come flooding back. Tears threaten to emerge at the thought of Sergiy Rebrov not instantly repaying his extravagant transfer fee. Sadness engulfs me, before the image of Harry Redknapp boasting about completing the signing of Louis Saha heralds fits of laughter. And don’t forget Bobby Zamora. How could anyone forget Bobby Zamora?

Then there was Helder Postiga. The striker had impressed under little-known manager Jose Mourinho at Porto, and his reward for 31 goals in 87 games was a move to the Premier League. Aged just 20 when Tottenham spent £6.25million on his signature in 2003, the Portuguese understandably struggled in a completely different climate. He played 19 league games – including a 2-1 defeat to Arsenal in November 2003 – scored one goal, then returned to Porto before scoring against England at Euro 2004.

STRIKER: Jeremie Aliadiere
In terms of memorable north London derby moments, there is hardly a shortfall. Thierry Henry’s wonderful goal and subsequent knee-sliding celebration in 2002 is captured by a statue outside the Emirates Stadium. Wojciech Szczesny attracted the ire of every former player by taking a picture of himself and his teammates in the immediate aftermath of a dour 1-0 win in March 2014. Paul Gascoigne inspired Tottenham to an FA Cup semi-final victory in 1991 with a wondrous Wembley performance.

But who could forget Jeremie Aliadiere’s incredible two minutes in an April 2005 derby at Highbury? The game was on a knife edge when he was introduced for Jose Antonio Reyes, as Arsenal led 1-0. The Gunners would go on to win an absolute classic 1-0.