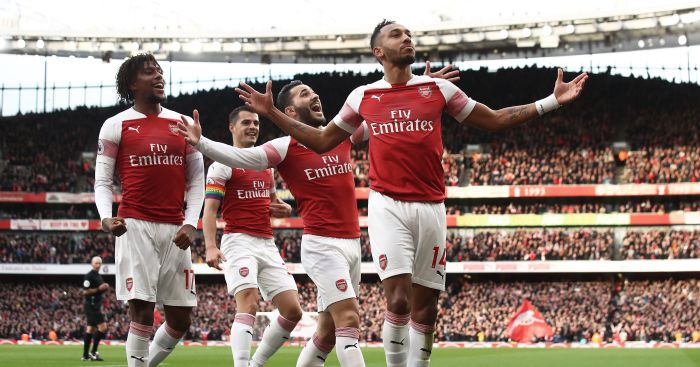 The north London derby is fast becoming the neutrals’ favourite Premier League game, and we have the ever-whirring tactical brains of Unai Emery and Mauricio Pochettino to thank for that. Both Arsenal v Tottenham games last season were a frenzy of strategy and counter-strategy – waves of attacks triggered by formation changes and bold substitutions. It was breathless stuff.

Sunday’s game could be the best yet between these two coaches. Arsenal’s summer recruitment means their squad is now perfectly equipped to implement Unai Emery’s tactics – meaning more chaos, not less – while Tottenham’s defeat to Newcastle United last weekend suggested they are arguably as defensively vulnerable as their hosts.

Here are five tactical questions ahead of Arsenal v Tottenham:

1) Will Pochettino’s and Emery’s tactics create another frenzied end-to-end game?
There is no point trying to guess the formations either club will use on Sunday. For starters, in the 1-1 draw in March, Spurs began in a 3-4-1-2 and Arsenal in a 4-2-3-1 while in Arsenal’s 4-2 victory the previous December Arsenal used a 3-4-3 and Tottenham a diamond 4-4-2. But aside from their obvious unpredictability here, Pochettino and Emery will inevitably swap formations, acting and reacting to each other throughout the 90 minutes.

Instead, let’s focus on the rhythms and the patterns that should emerge. Following that ridiculously disordered 4-2 last year, both managers calmed things down a tad for the reverse fixture. Emery was worried about Tottenham’s counters and didn’t press very high up the pitch, instructing both of his full-backs to stay deeper, and Spurs packed the midfield, hitting long balls forward in a cagier manner.

But that doesn’t mean this will be an airless match. New Emery-friendly signings at Arsenal mean they can start to use his Sevilla-era tactics more consistently – deliberately dangerous passing out from the back to draw a Spurs press – in order to create counter-attacking space behind them.

Pochettino will bite, and when Arsenal breakaways break down, Spurs can strike back via Lucas Moura and Son Heung-Min. The visitors will happily go direct to exploit the flaws in Arsenal’s back four, ensuring the pitch becomes stretched and the goals, hopefully, fly in.

2) Which manager’s in-game formation switches will work best?
That should get us through the first half-hour or so, but the tactical tweaks made by both managers will end up defining the contest. In the most recent 1-1 draw, Poch moved Christian Eriksen into central midfield to almost-fatal effect before switching to a bonkers 4-1-1-3 with Danny Rose sprinting maniacally around central midfield.

In the 4-2 in December, Arsenal moved from a wide 3-4-3 to a narrow 3-4-1-2, Spurs moved to mirror it, and then Emery countered again with a diamond 4-4-2 that won Arsenal the game. Similar tricks can be expected this weekend, and although it is impossible to guess exactly what each coach will do we can predict that Emery is more likely to get the upper hand.

It’s quite obvious that it’s Mauricio Pochettino, but he got absolutely schooled by Emery, twice, last season.

So much so that it prompted Emery to say “VAR is coming for them.” https://t.co/zrKJkIpqQ9

The Spaniard’s ability to read the tactical pattern of a game and make a match-winning change is highlighted by the fact Arsenal won 34 points from their first 17 matches of last season – despite never being ahead at half-time. Conversely Pochettino is often accused of making changes too late, or of failing to see when things are stuck; his introduction of Christian Eriksen and Giovani Lo Celso in the 62nd minute against Newcastle, for example, failed to change the tempo.

3) Will Lacazette and Ceballos target Spurs’ stand-in right-back?
Irrespective of the tactical changes to come, there are certain battlegrounds that will define the outcome no matter the formation or approach. An injury to Kyle Walker-Peters, coupled with the news Serge Aurier will not be in the match-day squad, means Moussa Sissoko at right-back for Spurs. In an unnatural position – from which Sissoko is more comfortable getting forward than defending – the midfielder is likely to be caught out, leaving space for Arsenal’s speedy front line.

Eric Dier or Moussa Sissoko at right back for Spurs in the North London really puts Arsenal’s right back issues in perspective seeing Ainsley Maitland-Niles has played there for at least 6 months.

Unfortunately for Spurs, Arsenal attack down the left flank more frequently than any other Premier League club (47%). Alexandre Lacazette and Pierre-Emerick Aubameyang tend to link up on this side of the pitch, while emerging star Dani Ceballos also has a tendency to occupy spaces on the left. When counter-attacking behind Spurs, this is clearly the most important flank for the hosts.

Worse still for Tottenham, if Pochettino pulls Sissoko out of midfield his side will be significantly weakened in the middle of the park…

4) Will Spurs’ midfield lack the urgency needed to match Arsenal’s?
A growing concern for Tottenham is a sense of stiltedness in central midfield, where sideways passing has become the norm. Without Sissoko or Tanguy Ndombele, it is possible Harry Winks and Eric Dier will make this problem worse against an aggressively pressing Arsenal midfield of Matteo Guendouzi and Lucas Torreira. Spurs may struggle to wriggle free and, caught flat-footed, allow Arsenal to counter through the middle.

It could also mean Eriksen gets lost (if he starts, that is), resulting in the sort of clumsy long balls forward that defined Tottenham’s approach in the 1-1 draw at Wembley. Arsenal will bring energy and assertiveness in midfield, and judging on their recent performances, Spurs will struggle to match their hosts. Winks needs to be at his very best to evade the Arsenal press with crisp distribution, linking the lines of defence and midfield, or Spurs will struggle for control or structure.

In years gone by Pochettino could rely on diagonal switches to high-quality attacking full-backs, negating the sluggishness of a Mousa Dembele-less midfield by stretching the opposition wide. These days, full-back is arguably the worst area of the Spurs team. Fortunately, it’s Arsenal’s weak spot too.

5) Can Son and Lucas width do damage behind the Arsenal full-backs?
It was completely the wrong strategy against Steve Bruce’s deep-lying 5-3-2, but using Heung-Min Son and Lucas Moura as wide forwards could do the trick this Sunday. Ainsley Maitland-Niles is definitely beatable in a one-on-one situation, something Arsenal only avoided at Anfield last weekend because of their surprisingly narrow diamond 4-4-2.

Son and Lucas, regularly switching wings, can also find joy making runs in behind Nacho Monreal, who was increasingly pulled around by Mohamed Salah. Getting the ball out wide to begin with will be Spurs’ biggest problem, but should this match indeed become end-to-end (and both sides’ vulnerable full-backs suggest it will) then Lucas and Son can be released into space by Eriksen’s long, raking balls forward.