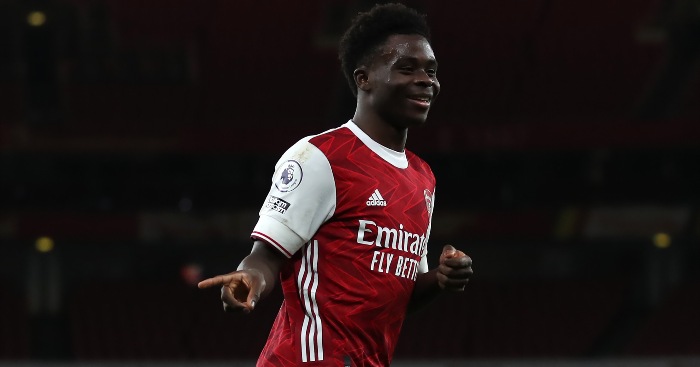 The Gunners were not at their best in the first half as they struggled to break down Steve Bruce’s side.

Their best chance of the half fell to Aubameyang. The forward struck the post with the goal gaping to leave the Arsenal faithful feeling frustrated heading into the break.

But Arsenal hit their stride in the second half as they blitzed past Newcastle. Aubameyang made up for his earlier miss to give his side the lead in the 50th minute.

Thomas Partey set the striker away on the counter and he made no mistake as he fired it home past Karl Darlow into the top left-hand corner.

Arteta’s side doubled their advantage ten minutes later. Emile Smith Rowe was at the forefront again as he dribbled past Jamaal Lascelles. The youngster pulled it back for Bukayo Sako who finished nicely past Darlow to make it 2-0.

Aubameyang got his second and Arsenal’s third in the 77th minute. Cedric Soares advanced down the right flank before putting it on a plate for the attacker and he tapped it home for his brace.

Arsenal are now unbeaten in six games in all competitions. This improved form has seen them rise up to tenth in the Premier League. They are now seven points behind fourth-placed Liverpool.

Speaking with Sky Sports post-match, as cited by BBC Sport, Arteta insisted that Arsenal were in “total control” against Newcastle:

“In the first half, it took us a while to break a structure like this. We had big chances that we didn’t score. We were in total control of the game so it was about keeping that right, keeping it simple and attacking the box. Then we produced the moments of the goals.

“I thought [Pierre-Emerick Aubameyang] had two or three really big chances in the first half which he didn’t score. But those goals today will give him good confidence so that’s good for the team.

“I know what the [young players] are capable of doing. They put a smile on my face. That is merit to them and their team-mates. Their performances were extraordinary. The expectation will be high with them so we have to take them through the right path. It’s a mixture of energy, passion and a little bit of immaturity at times which is good as you don’t play as tense. They did really well.”

“I am really happy [with Partey]. He got better and better as the game went on. He has a big influence and gave us things which were different from any other player. We have to protect him as he’s not played that much.”

“[Mesut Ozil] is in Turkey now. He is going through the medical and there is some paperwork to do. When the deal is done we will make an announcement.”