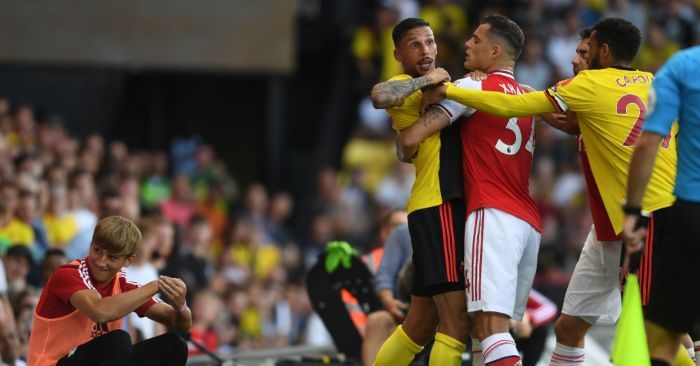 Captain Granit Xhaka said the Arsenal players were “scared” as Watford launched a second-half comeback to earn a Premier League point on the Vicarage Road homecoming of Quique Sanchez Flores.

The Gunners squandered a two-goal half-time lead as defensive errors again cost Unai Emery’s side and were lucky to leave Hertfordshire with a 2-2 draw as Watford had 31 shots on goal during the game.

Pierre-Emerick Aubameyang’s brace looked to have the visitors cruising only for Sokratis Papastathopoulos to gift possession to Watford inside his own box and allow Tom Cleverley to strike.

David Luiz then tripped substitute Roberto Pereyra to concede a penalty, which the Argentina international coolly tucked away as Watford collected just their second point of the season.

The performance saw Xhaka concede that the Arsenal players were afraid as Watford lay siege to their goal after the interval.

“We were scared in the second half,” he told Sky Sports. “We knew they would come at us and push us hard but we have to show more character and not be scared.

“What went wrong? That’s a good question. At half-time we went to the dressing room and everything was good.

“Everyone was happy but we came out and played such a bad second half. You have to say we are happy to take a point.

“We have spoken about it. We cannot give a performance like this in the second half. Of course mistakes do happen but it is not an excuse.