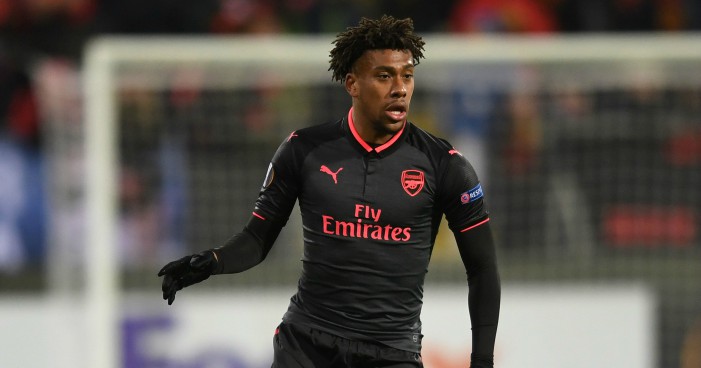 Alex Iwobi insists Arsenal can win the Europa League and secure an unlikely spot in the Premier League’s top four this season.

The Gunners won 3-0 at Ostersund on Thursday night to all-but secure a safe passage into the last 16 of the Europa League.

They are one of the favourites to follow in the footsteps of Manchester United and lift the trophy, which will see them return to the Champions League after a season’s absence.

Arsene Wenger still wants to secure that return through the Premier League, although they could be as many as 11 points off the top four when they kick-off against runaway leaders Manchester City in their next league outing on March 1.

Iwobi, too, feels it is possible to break back into the top four as well as claim Europa League glory.

“We have to do our best in both competitions,” he said.

“That’s what we are trying to do: get top four and also win this competition. That’s the aim.”

The Nigeria international has started seven of eight games since he was pictured at a party the day before holders Arsenal were dumped out of the FA Cup at Nottingham Forest.

Arsenal boss Wenger said Iwobi, 21, would be fined for the incident last month but has backed the forward by continuing to include him in his selection.

Asked about his run in the side, Iwobi replied: “I’m still learning, I’m still young.

“I’m still learning from the lads like Mesut Ozil and (Henrikh) Mkhitaryan. Every time I play, I am grateful.”

Iwobi was dropped to the bench for a potentially damaging north London derby defeat at Tottenham last weekend but was recalled as a strong Arsenal side saw off Ostersund with little trouble.

Nacho Monreal opened the scoring with his third goal in six games with Ozil wrapping up the win after Sotirios Papagiannopoulos’ own goal.

Tom Pettersson then missed a last-gasp penalty for the hosts, who face an uphill battle when they arrive at the Emirates Stadium next week.

Arsenal have the Carabao Cup final against Manchester City three days later but Iwobi believes the tie is not yet over and that focus cannot shift to Wembley.

“First we have to focus on Thursday, take each game step by step. We have to prepare one more game before that (final).”