Home Arsenal Arsenal’s No. 9 and other vacant numbers 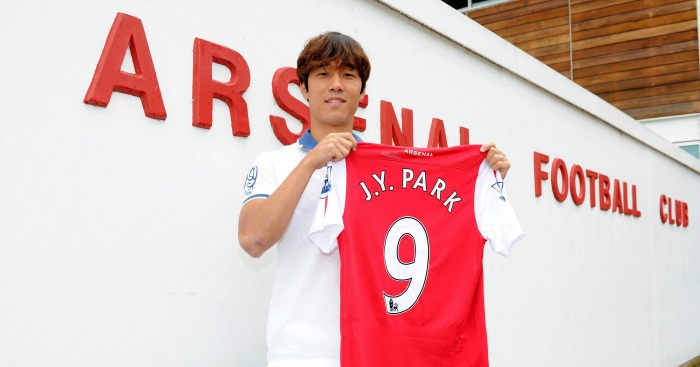 It looks very much like Tottenham have handed their No. 9 shirt to Vincent Janssen; just don’t tell him that Roberto Soldado and Roman Pavlyuchenko were the last men to wear that particular number. It does mean that they are the only big Premier League club (including champions Leicester) to fill their 1-11 shirts. So let’s take a whistlestop tour of what’s missing…

Arsenal: The No. 9
Since Nicolas Anelka vacated the Gunners’ No. 9 shirt in 1999, it has been worn by Davor Suker, Francis Jeffers, Jose Reyes, Julio Baptista, Eduardo, Park Chu-Young and Lukas Podolski. It’s little wonder that Olivier Giroud turned down the chance to switch from No. 12 last summer. “I know nine is for the attack leader but I will not be a better player if I wear a different number,” said the Frenchman with considerable wisdom.

Chelsea: The No. 9
Working backwards, the last wearers of the Chelsea No. 9 shirt were Radamel Falcao, Fernando Torres, Franco Di Santo, Steve Sidwell, Khalid Boulahrouz, Hernan Crespo and Mateja Kezman. Could that list be the reason why Michy Batshuayi took the No. 23 instead of a shirt that has – again working backwards – reaped 1, 5, 8, 6, 1, 0, 0, 0, 10 and 4 Premier League goals in the seasons it has been worn since Jimmy Floyd Hasselbaink was sold in 2004?

Leicester City: The No. 3
How does anybody ever replace Paul Konchesky? Christian Fuchs would be the natural wearer of the No. 3 shirt but he wears No. 28 and has apparently never worn the No. 3 in his career. He wears No. 5 for Austria, which should confuse the hell out of anybody who likes to see that on the back of a centre-half. Spare a thought for Ritchie De Laet, who had his No. 2 shirt given to new signing Luis Hernández when he was looking the other way. Fortunately, he had not recently launched a RDL2 brand.

Liverpool: The No. 4 and No. 8
Let’s face it, nobody is going to take the Liverpool No. 8 shirt in a hurry. Which might explain why Georginio Wijnaldum opted for the No. 5 when he signed from Newcastle. We would also suggest that nobody take the No. 4 either – who could possibly fill Kolo Toure’s shirt? Liverpool do, for now, have a No. 9 but Christian Benteke has done about as well as Rickie Lambert, Iago Aspas and Andy Carroll before him. Are all No. 9 shirts cursed?

Manchester City: The No. 2
Clearly it should be the legendary Pablo Zabaleta but he took the vacant No. 5 when he arrived in 2008 and Micah Richards was then City’s established No.2. And then clearly it should have been given to Bacary Sagna but he was already attached to the No. 3 shirt, because of course Abou Diaby was No. 2 at Arsenal. Shirt numbers are mental, aren’t they? Aleksandar Kolarov is City’s No. 11; that’s all you need to know.

Manchester United: The No. 2 and No. 6
‘United save No 6 shirt for Pogba but still can’t land him’ was one of several headlines when Manchester United announced their new squad numbers. Pogba famously wore the No. 6 for his first three seasons at Juventus and the assumption is that the Frenchman will stride into Old Trafford and claim the number previously worn by Jonny Evans and Wes Brown. Less fuss has been made about the fact that the No. 2 shirt is vacant; Matteo Darmian arrived last year when previous incumbent Rafael was still on the books.