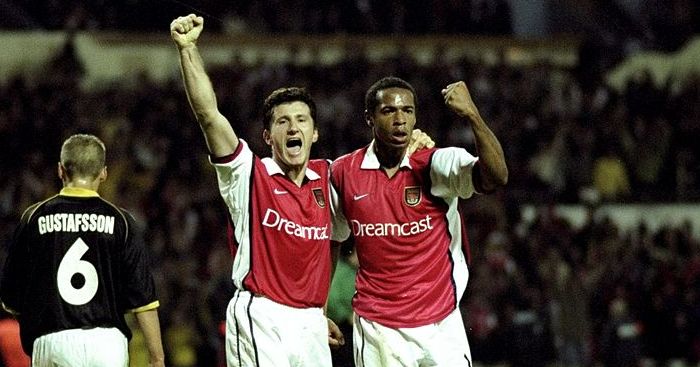 19 – Calum Chambers (£16m, from Southampton in 2014)
The 24-year-old is still clinging to a place in Arsenal’s top ten most expensive signings. Will there be another Unai Emery U-turn this season?

22 – Lucas Torreira (£26m, from Sampdoria in 2018)
The previous incumbent was one Nwankwo Kanu, signed from Serie A after impressing at the World Cup. He stayed for five years before joining West Brom; Lucas Torreira seems a little more likely to return to Italy after a season or two.

23 – Granit Xhaka (£35m, from Borussia Monchengladbach in 2016)
Do his parents still give him the house key instead of his older brother?

26 – Alexandre Lacazette (£46.5m, from Lyon in 2017)
The Gunners have a thing for signing 26-year-old French international strikers in record deals. Sylvain Wiltord reigned supreme for 17 years until Alexandre the great came along.

27 – Lucas Perez (£17.1m, from Deportivo La Coruna in 2016)
If Arsene Wenger ever does return to management, can we please just be a little more careful about the financial control exerts?

28 – Pierre-Emerick Aubameyang (£55.4m, from Borussia Dortmund in 2018)
His last signing was not too shabby, mind. Be a shame when he listens to the little boy within Robin van Persie.

29 – Mikel Arteta (£10m, from Everton in 2011)
He quite impressively looked the same age then as he did ten years before and eight later. The Newcastle job ought to change that.

32 – Pat Jennings (£45,000, from Tottenham in 1977)
After 13 years with Tottenham, Pat Jennings was winding down a hugely successful career. Making 327 appearances, reaching three successive FA Cup finals and a Cup Winner’s Cup final in four years and becoming the first player in English football to make 1,000 senior appearances is a weird way of putting your feet up. Bloody goalkeepers.