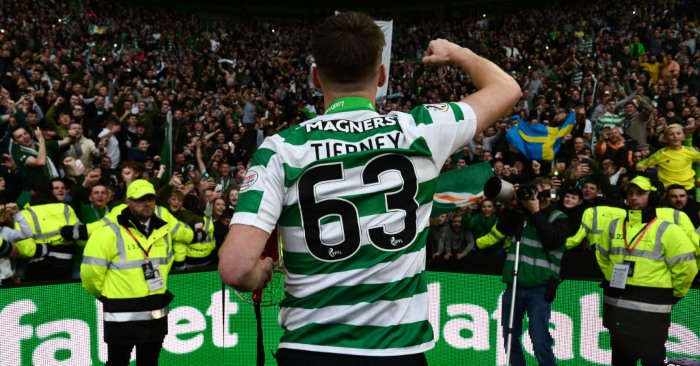 That place is Scotland. A beautiful, confident, self-deprecating country. Both wild and cultured, to live here is to live in a land of poetry and poets, science and scientists.

But its football leagues are wrongly widely disparaged – sometimes by its own citizens in pursuit of gallows humour – but mostly by people who have never watched a game of football with their feet on Alba’s holy soil.

Consequently, the players who ply their trade here are thought poor quality or more usually just ignored by observers south of the border. In England even the top flight is routinely and stupidly called ‘a pub league’ or any number of other insults.

This patronising ignorance must be why English clubs either do not buy players from Scotland’s leagues (only 11 Scotsmen played in the Premier League last season) or if they do, they won’t pay much money for them, despite being nakedly and idiotically financially incontinent when buying players from pretty much anywhere else.

Take John McGinn, for example. McGinn is superb. He’s just won Player’s Player of the Year and Supporter’s Player of the Year at Aston Villa in the Championship, and should have won Goal of the Season too for his long-distance screamer. He was axiomatic to their promotion. McGinn started at St Mirren and then moved to Hibernian. To anyone watching his rise from 2012 onwards, it was clear he was a special player; he was the heartbeat which dictated the rhythm of how Hibs played.

Aged 23, last summer he moved to Aston Villa. The fee was reported as an unbelievably paltry £2.79 million with add-ons. That fee was surely only so low because he was coming from Scotland. If he was being bought from an English club, for a player of his age and quality, it’d have been at least ten times more and still have been thought cheap. I mean, Villa have just spent £20million on defender Tyrone Mings. Okay, they’ve got more money now that they’ve been promoted but even so, if Mings played for Hibs, there is simply no way he would have commanded that fee, even though he’s played just 32 games in four years, 15 of which were at Villa on loan. £20m for Mings, £2.79m for McGinn. That’s a ridiculous gulf especially when McGinn is the far more important, far more influential player of the two and likely always will be.

Just remember, when the going gets tough and we are still waiting for the next big signing. Fans from other teams are slagging #Villa off and your just feeling fed up, just remember this “We’ve got McGinn” #AVFC #UTV #VillaFamily pic.twitter.com/672sC5O30r

The fact no Premier League club was prepared to buy McGinn last summer, even for a mere three million, just shows how blinkered they are to Scotland’s finest. At the same time Huddersfield were prepared to pay £5.7m for Ramadan Sobhi, a midfielder/winger from Stoke who was so poor he played just four games before being loaned out in January to Egyptian club Al Ahly. Okay, McGinn plays centre-mid, but how could he be worth less than half the money paid for such a flop? Rumours are Manchester United are interested in McGinn now and Villa reckon he’s worth £50million, presumably now that he’s had the taint of Scotland washed (Scots-washed?) off him after a year in England. He hasn’t got that much better. He was always that good. That he’s now being considered by a top-six club shows just how scared top English clubs are of buying a Scot until someone else in England has already taken a chance on him. He doesn’t eat macaroni pies laced with heroin while singing songs by the Proclaimers, after all.

Currently Arsenal are trying to buy Kieran Tierney from Celtic. They initially bid just £15m, then £18m, then £25m. This is almost patronising from a club that is paying Mesut Ozil alone a million pounds per month. Tierney is 22, he’s played 12 times for his country, is proven on the international stage and has been excellent for Celtic for four years. I fully understand these numbers are insane and a symptom of the Premier League’s fatally diseased financial model, but Aaron Wan-Bissaka has just cost Manchester United £50m, is 21, is not a full international and has had one decent season at Palace.

He’s an exciting prospect, but the idea that Tierney is worth half that money – even in the through-the-looking-glass world of the Premier League – makes no sense. It is just anti-Scottish bigotry.

Look at Andy Robertson. Liverpool bought him from Hull for just eight million. Hull had paid just two and a half million to Dundee United in 2014 where he was SPFA Young Player of the Year. Because Hull City had bought him for next to nothing because he was coming from Tannadice, they accepted a ludicrously low bid from Liverpool, who got one of the best full-backs in world football for peanuts. A full-back who is probably now worth at least ten times what they paid for him.

One of the excuses proffered for the disparity in valuations is that the player is coming from a ‘lesser’ league and thus has to ‘prove’ himself in the Premier League or Championship. This is a nonsense notion, as the Ramadan Sobhi transfer well proves. Despite being at Stoke City and presumably passing the ‘prove yourself’ test, he was still terrible.

There is a staggering lack of depth of understanding of Scottish football. When Aberdeen played Burnley over two legs in last year’s Europa League, the financial gulf between the clubs was vast, but the difference in quality was not. Yes, Burnley won, but if Aberdeen were a pub team playing a pub league, it wouldn’t even have even been close and the Dons wouldn’t have got a draw – and really should have won – at home.

And by the way, as we should all know, there are some heinously rotten sides in the Premier League every season, usually choked with expensive overpaid flops that would regularly take a beating off Scotland’s top sides. And if you hate that idea, you’ve drunk too much Premier League Kool-Aid. The idea that it’s a unique shining beacon of top-quality football is nothing but pure marketing which has inculcated a delusion of superiority into too many who are too easily hypnotised.

But because so few Premier League acolytes watch Scottish football on a regular basis, they think no top-flight Scottish team could ever beat a top-flight English team when in fact, they absolutely could and would because the Premier League also-rans are often not that good and have a lot of poorly performing players.

Of course low fees are sometimes a consequence of Scottish teams being short of money and this is exploited by the obscenely monied Premier League clubs (though they seem to find bigger fees for players from many other ‘lesser’ countries) but when there are just those 11 Scottish players in the Premier League in 2018/2019, it suggests a far deeper malaise in the English attitude to Scotland.

Scottish football fans are a phlegmatic, realistic bunch largely without any pretension. We know our place in the scheme of things, but most could give you a list of 20 players, at the very least, who could hold their own in the English top flight, probably a lot more. Not because those players are all especially stellar but because they are of better quality than some of the poorest Premier League players.

Neil Lennon is right to use the Wan-Bissaka example to compare/contrast with Tierney. The fact is the PL market pays a certain (high) fee for players. 🇩🇪 clubs have noted that for years. There is a price & there is a PL price. 🏴󠁧󠁢󠁳󠁣󠁴󠁿 clubs (Celtic in this case) must note the same.

So it seems strange that English top-flight clubs ignore Scottish-based players whilst repeatedly wazzing millions away on others. It’s plain bad business. Even while accepting that the very concept of transfer fees is bizarre and cannot be based on any objective measurement, it still makes no sense to ignore such a great resource that is on the doorstep. But I may have found the reason.

While I was writing my next book Can We Have Our Football Back? – which will be available in the next month or so – I spoke to someone who works behind the scenes at a top-flight club and they suggested that one of the reasons for this blinkered attitude is that some at clubs fear the wrath of fans who think signing someone from Scotland is not ambitious or exciting enough, precisely because so many have such a negative, uninformed view of Scottish football

“They’d rather the club sign a player from anywhere else in the world because they seem more glamorous than from Dundee United or even from Celtic, even though they have never seen the player. Buy someone from Rangers or Celtic and you’ve a boy used to the pressure of playing in front of huge crowds, but no, they’d rather have a £30 million defender from Spain or Columbia rather than from Ayr. To some, it just sounds like they’ll be better, regardless of the actual player. It’s totally irrational.”

Scotland is used to being ignored, marginalised and not understood by England, as this week in politics will prove once again, hopefully for the final time. Negative, uninformed views of the game and the players north of the border are easy to find. Because of the failure of the national side, the presumption is clearly that Scotland is a desert of quality and entertainment. That presumption is utterly wrong.