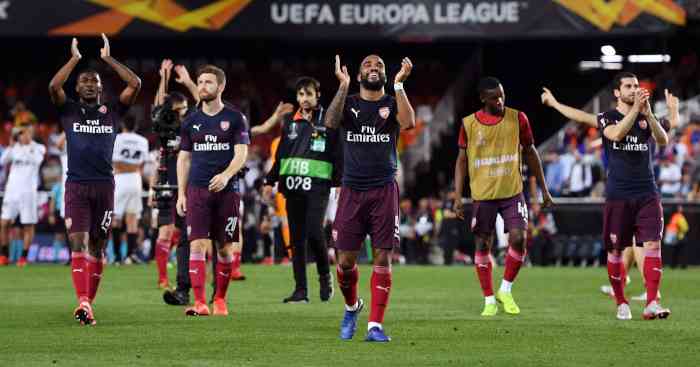 Enjoy the cup final and send us an email to theeditor@football365.com…

Arsenal wasted opportunity
Arsenal have missed an enormous chance to help heal the relationship, erroded during the Silent Stan years, between club and fan. A chance to say “our fans are the heart of our club” and actually mean it.

Cheapest way we can find to get to Baku is £979 for a day (and beerless) club travel flight with Thomas Cook. If we wanted (which we have) go via three flights, across four days, it is £1240 for flights alone. Dont even go there for hotels and “refreshments”.

The club could have said “fair play, this is sh*t. We will subside club travel to £500”. This would have cost them the equivalent to a weeks wage to Mkhitaryan.

Instead? Lets get their pants down again.

We dont care as it is what it is and we expect it. Shame for the club though; could have scored a proper win with the fans.
AMK (might just watch it in the airport bar).

Man Utd agenda
First time mailing the mailbox, but I think that Yash has opened an important point around the scrutiny that BAME players are placed under.

The treatment of Sterling has only served to highlight the deep rooted racism that continues in the UK. It sits uneasy with me to see how the majority of scapegoating falls on the BAME players for United’s poor season.

The stereotypes that are applied to Pogba and some of Manchester United’s players are deeply disturbing. When Pogba is playing well, as with most BAME players, the praise he receives overly focuses on his physique (pace and power), little notice is paid to his creativity or intelligence. Lukaku is another to highlight this, find me an article that praises his positioning and movement amongst the abundance of mentions “hold up play” and “strength in the air”.

When these players are playing without confidence and badly the narrative follows quotes such as lazy, poor attitude and buffoonish (Lukaku’s “poor touch”, Pogba, Lindgard and Martial bad attitude). Google “Manchester United attitude” and you will find 90% of the pictures that accompany articles are of one of these 4 players mentioned.

The focus on how these players live outside of football differs as well. The idea of not caring about what they do because of the what they do outside of football, Pogba is only interested in “interested in furthering his own cause and brand”. Lingard and Pogba, suffer here because of their entrepreneurial spirit outside of football, but they are “distracted”. What is the difference between what they are doing and say Ibrahimovic (no stranger to building his own brand), little, yet the treatment of these players is drastically different. It is this whole perception of certain BAME being judged “flash” rather than successful young men like others would be.

I recall recently seeing an article on this site about how Rashford was “not so humble” without any context of the situation. The idea of humble again brings links to slavery (passive/submissive). Is Rashford not allowed to hold an opinion? Previously Rashford has been placed on a pedestal for being “humble” and used as the opposing argument for “unhumble” Sterling.

These stereotypes are inherited from the historical golliwog, pickaninny and minstrel stereotypes (ignorant, lazy, buffoonish, superstitious, joyous). Football is a confidence game, its not hard to see how the confidence of BAME players can be drained in this country given the pressures and constant lazy stereotypes they are labelled with.

It’s not wrong that United have had a poor season and yes Pogba is their most expensive player, but the proportion of blame being thrown at him and the others mentioned seems overwhelming. I see less blame being places on the door of the likes of Matic and DeGea, both who have arguable had their worst seasons in the league

Yet why are we following this narrative? The media takes a large part of this blame, sensationalising for the sake of headlines leading. As football fans we have a tendancy to draw hyperbolic conclusions based on nothing but snippets of the headlines. It is time for a serious conversation and understanding around the language that we use. Question what we are saying, why is this person who statistically is one of the best performers in his team “lazy”, is it because the headline says so it? There are many inconvenient truths and contradicitons around race in the U.K. Akala’s recent book Natives is a good place to start.
Dave, London

Moving the deckchairs on the Titanic
Smyth, MUFC. I wasn’t ‘sneering’ at anyone, and I completely agree with every single thing you wrote after that comment. Clearly however, I’ve made a complete fist of getting that across.

My older brother has been a season ticket holder at OT (just) longer than I’ve been going to City games (1972). I don’t need anybody else to tell me how the Utd/City supporter intermix works (good or bad). But it’s precisely because that the Red bit of my family is so close that ‘Bantz’ just doesn’t apply anymore.

I sent an (unpublished) mail some three weeks ago which, amongst other things, and in terms of a DOF, that Utd could employ the entire class of ’92 and nothing would change for the better. Your own mail makes a compelling argument in support of that argument, I think.

My ‘issue’ was with Utd fans wishing to sign Jadon Sancho, or Harry Maguire or, as the latest buzz would have you believe, Anton Griezmann. It’s like somebody standing in a living room in their own house that’s burning down around them and talking about the new curtains they want to buy.

Seriously?
Mark (Patrick Bamford should be ashamed to look in the mirror every day) MCFC

Gone for a song
To the scouse and assorted Scandinavians with regards to the song.

What’s that? Our club didn’t bend over backwards and apologise to you about singing a song?

It’s almost as if the club didn’t apologise because they don’t like you.

Anyway, off to Wembley….
Matt MCFC

Mediawatch-ing Johnny Nic
Was Johnny Nic trying to be ironic in his otherwise excellent HOTW piece when he wrote “Plenty of other outlets did that witless, pointless, activity ‘Here’s what some people said about this on Twitter’ which is always always now headlined ‘Some Fans Think…’” and followed it immediately with a section entitled “What the people say” – literally a list of things that people have said about this on Twitter?

Maybe I’m being thick and just not getting the joke here.

Or is this excused from being witless, pointless and depressing on the grounds that it was an opinion piece?
Chris Bridgeman, Kingston upon Thames

…The irony of of John Nicholson commenting on the depressing trawling of twitter feeds to pass of as news in his Tammy Abraham piece and then literally in the next paragraph including opine from twitter in his article was quite beautiful. Due to the excellence of his work I am assuming it was delicious irony.
Luke Dubai Os

Worst of all options
The one silver lining of our impending transfer ban is that Sarri would be unable to buy either of his pets (Kovacic and Higuain) but now the stories making the rounds are saying that those are the only two players we would be able to sign.
Oh man, please can FIFA choose one punishment or the other – don’t give us both!

Would love to see Tammy Abraham given a decent shot to lead our line next season. With him RLC, Hudson-Odoi and Christensen I’d say our academy is doing ok, despite what some people in the media like to say (plus we’d have 4 of England’s future in the team (I’m including Barkley in this quartet) – when last did that happen at Chelsea?)
Ed

Bielsa rhapsody
I was bitterly disappointed with the Leeds result. Not at the team, they’ve had a better season than any expected; I’m upset with myself that I allowed myself to hope. Partially to punish those in the household, who can’t begin to understand the relevance but mostly because I had no words – I went straight to bed after the game and didn’t speak to anyone for 15 hours. I should point out that I watched the game in Canada and it finished about 4:30 in the afternoon. Only 48 hours since disaster fell, I find myself thinking of Biesla’s Rhapsody, the brilliant parody of Bohemian Rhapsody: “Ohhhh Bielsa! You just listen Bielsa! We gotta get out We gotta get right out of this league.” For those of you who’ve never seen it, check it out on You Tube – it was the best thing that happened at Leeds this season.
Leeds fan marooned in Canada and the Championship

Worst transfer ever
I don’t think anyone can disagree with Gregory Whitehead’s assertion about what an unmitigated disaster the Sanchez transfer has been. He’s been not just the biggest flop in United’s recent history, but has been quite possibly the worst transfer of all time. Certainly the worst transfer since my mate at primary school (who shall remain nameless) applied one (as in a temporary tattoo) onto his todger sometime in the mid-’90s. And insisted on showing me.
Lee, mentally scarred

Palace loanees
Bit harsh on Palace loanee Nya Kirby. He was an England u17 winner in 2017 and has done well on loan at Blackpool in the second half of this term, including winning their player of the month. Certainly looks a better prospect than Jason Lokilo or Jaroslav Jach – who was so unimpressive in Turkey he got loaned to a Moldovan team!
Joe, Midlands