A fine trio, but naturally, exits would first be required. 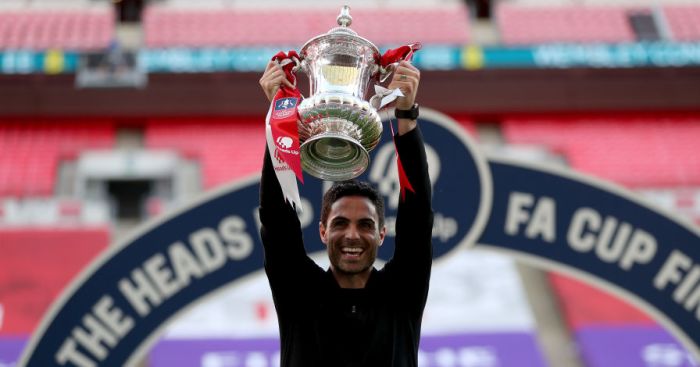 Arsenal are ready to back Mikel Arteta in the transfer window to the tune of £100m, with a trio of ‘primary’ targets already identified.

The Gunners lifted their 14th FA Cup last weekend, ensuring the feel-good factor returned at The Emirates after an underwhelming league campaign.

Despite the success, however, a number of key issues remain in Arteta’s squad ahead of the new season.

The status of star striker Pierre-Emerick Aubameyang remains unclear, though recent signs pointed towards an element of progress in negotiations.

Several other areas of the squad remain lacking in genuine quality and depth, but according to The Metro (via The Sun), Arteta will be backed to make sweeping changes.

The outlet report that the club will provide a £100m warchest in order to secure his three primary targets.

Brazilian winger Willian is strongly expected to sign after being offered a three-year deal, and he could be joined by fellow countryman Gabriel Magalhaes.

The 22-year-old Lille defender is described as being ‘highly regarded’ by Arteta, and would be available for around the £25m mark to shore up The Gunners’ ailing backline.

Incumbents Matteo Guendouzi and Lucas Torreira have both fallen down the pecking order in the engine room, and Partey has proven his worth under Simeone as a tried and tested combative midfielder. The Ghanaian has a £45m release clause in his contract, but Atletico have thus far been stubborn over lowering their demands.

Finally, the return of Dani Ceballos could be on the cards.

Arsenal are reported to be keen to bring him back via the loan route once more, but parent club Real Madrid would prefer a sale.

A fee of £30m is cited as required to secure his services, and Ceballos previously hinted he would be open to the move after relaying that his national team ambitions would only be fulfilled with regular playing time for his club.

As has been the case in recent years at The Emirates, a number of players would first have to be sold in order to free up the necessary funds.

Departures for Guendouzi, Torreira, Shkodran Mustafi and a player Arteta has been overruled by the board over are all speculated.