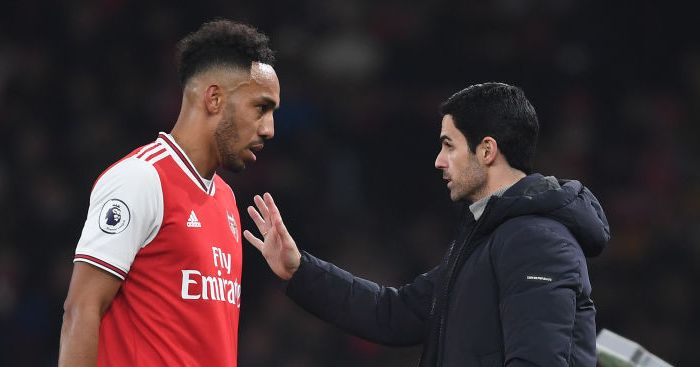 Mikel Arteta insists he is unfazed by the exit talk surrounding Pierre-Emerick Aubameyang at Arsenal.

The Gunners are yet to tie their talismanic striker – who’s scored 19 goals this season – to a new contract in north London, with his current deal to run until 2021.

For now, Arsenal are eager to avoid being dragged into a debate regarding a prized asset.

Aubameyang has offered no indication that he is looking for a move, with that enough to convince Arteta that there is nothing to worry about.

When asked whether the speculation has become distracting for the Gabonese striker, Arteta told the Evening Standard: “I don’t think so. He’s very used to that. I can’t see anything on that.

“It is very difficult to replace a player of that calibre, but hopefully we can keep him and we don’t have that issue to resolve.

“We went through that [playing without Aubameyang] when he was suspended for three games [in January]. And we had a good response from the players in those games, but long-term if you lose him the impact is obvious.”

Questions have also being asked of Bukayo Saka’s future on the back of a breakthrough season for the teenager, but Arteta insists the discussions are out of his hands and he trusts the Arsenal board to get the deals done.

He has said: “The club has a very clear idea of how he wants to develop things.

“They are in constant communication with players’ agents and they know the plan better than I do. I completely trust them on that.”

Arsenal are keen to see Aubameyang put pen to paper because the 30-year-old frontman has been a talismanic presence again this season, netting 19 goals across all competitions.