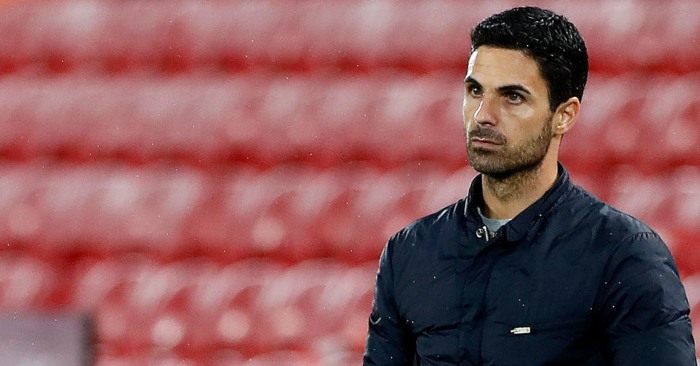 Mikel Arteta admits Arsenal are “a long way” off the final product after a “challenging three or four months”.

Four Premier League defeats have left Arsenal 11th in the Premier League, with the team criticised for a lack of creativity and ideas in the final third.

FEATURE: No panic but Mikel Arteta needs an Arsenal reaction…

Arteta too has come in for criticism in recent weeks but has urged Arsenal fans to trust the “process”, which will take time.

“We’re a long way, I’m afraid,” Arteta told Arsenal.com. “It’s part of a process. The results have to be immediate, and the challenge we have with the club we are representing is that we have to win as quickly as possible every game in every competition.

“So far we have played 14 games in all competitions this season, we won 10 and lost four and the four of them have been in the Premier League, so it is a little bit imbalanced.

“There are a lot of things to do, short term and medium term, we have seen a lot of changes not only on the pitch but structurally as a club as well, it’s been difficult, it’s been a challenging time in the last three or four months, a lot of things have happened.

“We have to settle and everyone has to realise where we are now, but I see the future as really bright. I am a really positive person and I tend to learn much more when things don’t go well and we have a defeat like we had the other day that really hurt after the performance we had at Old Trafford.

“We have to understand why it happened, be really critical first of all with myself and try to understand the players better, and give them more solutions to win more football matches.”